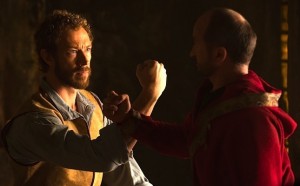 The news that Dyson has been accused of murder and will be standing trial for the charges is the latest thorn in Bo’s side. After fighting her way out of a Wanderer-induced captivity and beginning the search into what caused her to sign over her allegiance to the Dark, Bo’s already been through quite a bit this season on Lost Girl, meaning that her support system has become all the more important. She’s always needed Kenzi, Dyson, and Trick to be the best succubus that she could be, but they’ve been the blood that flows through her veins during season four, the very reason that she’s able to get up in the morning and keep pushing forward even when things aren’t looking so hot. But can she find a way to free Dyson from the clutches of the Una Mens?

On the next episode of Lost Girl, Bo gets inside Dyson’s memory as a way of digging up the evidence necessary to exonerate him from the murder charges. Along with Tamsin, she’ll be going back to the time that the murder supposedly took place in order to get Dyson’s side of the story, seeing as how there’s a good chance that the accusations aren’t based on fact and that the Una Mens are only pursuing them due to her connection with Dyson. Bo has made it her mission to protect her friends by any means necessary and while she might be able to get Dyson off without facing any punishment for the trumped-up charges, the fact that she’ll be going up against the Una Mens against can only mean that a bigger target will be placed on her back going forward.

Will Bo be able to find enough evidence to exonerate Dyson? Who do you think has brought up the murder accusations? Is Bo’s journey into Dyson’s mind going to help her search into the whereabouts Rainer?