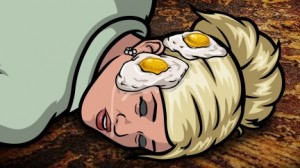 FX has revealed that animated comedies Archer and Chozen will begin a two-week Olympic-fueled hiatus on Monday, February 10th. The two series, which have opened up a new night of programming for FX, will return on February 24th at their regular times, with the gang of Archer Vice going for a road trip on a bus that Malory bought and an old flame threatening to come between Chozen and his friendship with Crisco and Ricky.

Also impacted by the Sochi Olympics is Justified, as the crime drama will be taking one-week off beginning Tuesday, February 18h. The show will return February 25th with an episode that finds Raylan pursuing a grifter and Boyd heading south with the Crowes.

Though it seems likely that the trio of shows wouldn”t share a whole lot of audience with the Olympics, it”s better to be safe than sorry in cases like this, considering that the first night of Olympic coverage netted nearly a 6.0 in the 18-49 demo last night, doubling up American Idol in the process. FX shows may see most of their audience through replays and DVR, but it wouldn”t be doing any of them a favor by throwing them in front of a buzzsaw, particularly in the case of Chozen. The comedy, featuring voice work from the likes of Bobby Moynihan, Method Man, and Michael Pena, garnered about 700,000 viewers its last original episode and regularly holds a little more than half of Archer“s numbers. As such, it needs all the momentum it could get, momentum that would be difficult to regain if it sustained damage airing against the Winter Olympics. A two-week hiatus isn”t ideal for a new show, but it”s the preferable option here and could give Chozen a better chance at renewal.

Archer airs Mondays at 10:00 on FX, with Chozen following at 10:30 and Justified airing Tuesdays at 10:00. The network”s premiere of The Americans season two will not be impacted by the Winter Olympics, as FX scheduled the return of Philip and Elizabeth Jennings for days after the Sochi closing ceremonies.

Do you think it”s smart for FX to avoid the Winter Olympics? Would any of their shows take a serious hit against the sports coverage? What have you thought about the first few episodes of Chozen?