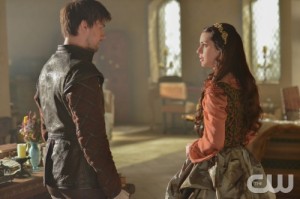 Catherine has proven herself to be as resourceful and manipulative as she needs to be in order to retain her power. After years of feeling marginalized by King Henry, she’s fought, scratched, and maneuvered her way into having a tight grip on the crown and due to the effort it’s taken to get her into this position, she has no intentions of giving up her spot to anyone, much less Mary. However, instead of simply playing defense and keeping herself in the same position, Catherine finds that her hand is forced when Henry accuses her of adultery and treason, offenses that could easily result in her beheading. While a king cannot simply order the death of a queen without a trail, he threatens to produce witnesses to corroborate anything and everything he tries to make stick against her, meaning that to save her own life, Catherine has to throw Bash under the bus.

On the next episode of Reign, Catherine attempts to save herself by making Bash’s dark past public in hopes of having him removed from the line of succession. Soon enough, though, talk turns to assassination, as she knows that there’s no persuading Mary to run back to Scotland; thus, the only way to ensure that there’s no one to take the English throne that Henry covets is to kill Bash and force Mary out of the country, possibly leading to a restoration of Francis into the line of succession. However, in order to protect her life and the lives of Bash and Francis, both of whom she dragged into this mess in the first place, Mary opts to dig into Catherine’s past for a secret of her own that could crush the queen’s chances of regaining her power and living to see another day. Will the two come to an understand and agree to a cease fire, provided Mary do what she can to prevent Catherine’s execution? Or is Mary going to take the opportunity to rid herself of the queen once and for all?

Elsewhere on Reign, Nostradamus reveals the shocking truth about Clarissa.

Will Mary or Catherine emerge victorious this round? Is there a chance the two will ever be able to work together rather than against one another? How will the castle react when they learn the truth about who Clarissa is and the role she’s played in their lives without anyone knowing of her existence?