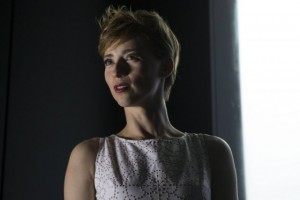 According to Deadline, Karine Vanasse has been promoted to a series regular for the (currently hypothetical) fourth season of Revenge, up from the recurring status she’ll enjoy this season. Despite her status as recurring, Vanasse has appeared in nearly every season three episode to date, with her character firmly in the middle of the drama threatening to swallow the Grayson family (as well as the Hamptons) whole.

While not an official renewal or anything resembling such, the promotion is a vote of confidence for Revenge, which hasn’t been the hit that ABC likely wanted when they moved the watercooler soap to Sunday nights in 2012. This season, though, has seen the show gain back a lot of the creative momentum that was lost over season two and weather the flurry of competition it faces (Golden Globes, Downton Abbey, The Walking Dead, NFL, The Good Wife, Boardwalk Empire, Homeland, etc.) fairly well, especially given the state of the network and the declines the show suffered last season. Word on Revenge‘s renewal status likely won’t come until May, though if the show stays steady enough during the traditionally weak broadcast spring, there’s always a chance the network will give the series an early fourth season renewal.

In addition to her role on Revenge, Vanasse has appeared on the likes of Pan Am, Killer Wave, and October 1970.

Revenge airs Sundays at 9:00 on ABC. The show will be moving to 10:00 beginning in March, allowing new drama Resurrection to air following Once Upon a Time.

What do you hope to see from Margaux for the rest of the season? If Revenge does in fact get a fourth season renewal, where would you like to see it aired? Should the fourth season be the final go-around for Revenge or do you think the show still has more story to tell?