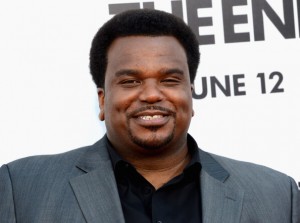 Deadline is reporting that NBC has ordered six episodes of Craig Robinson comedy Mr. Robinson, as well as hired Mark and Rob Cullen (Back in the Game) as executive producers and co-showrunners. Originally, Greg Daniels (The Office) and Owen Ellickson (Friends with Benefits) were the creative team behind the series, but both have since left the project.

Mr. Robinson began going through development about a year ago and missed the cut in May 2013 for a spot on NBC’s schedule. However, the network extended options for the entire cast through the end of last year and ordered additional scripts in June to keep the project, which stars Robinson as a musician-turned-music teacher at a middle school, alive. Robinson is said to be the only original cast member from the first iteration of the pilot still involved in the project. Gone from the cast are the likes of Larenz Tate (Rescue Me), Amandla Stenberg (The Hunger Games), and Jean Smart (Designing Women).

While there’s a chance that Mr. Robinson could be kept for either summer or next season, it seems likelier that the series will sub in for a failing midseason series or take the place of Sean Saves the World, which doesn’t have a full 22-episode order. The latter makes sense if for no other reason than Robinson’s familiarity with the audiences after starring on The Office for the duration of its run, much of which was in the Thursday at 9:00 slot currently occupied by Sean, and elevated profile after cinematic summer hit This is the End. NBC also had comedy co-productions Welcome to Sweden and Working the Engels on its roster, though, so what the network will look like in the coming months is still a mystery.

Will you be watching Mr. Robinson? Where should NBC air the show? Do you think this could be the show that turns the network’s comedy fortunes around?