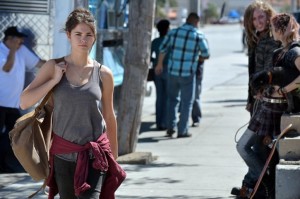 Callie is used to thinking for two – herself and Jude. Due to constantly moving throughout the foster system and never developing a sense of trust with those who took her in, Callie’s world never expanded beyond her brother and thus, she became emotionally closed off and unable to let even the most well-intentioned of people inside. Not even when Lena and Stef took her in did she let go of the demons that haunted her for years and when she made the decision to run away to Indiana to be with Wyatt, she made it without the rest of the family in mind. She wanted to leave to ensure that Jude had a good home and that she didn’t screw up yet another situation, but in leaving the Foster home shortly after Lena and Stef offered to adopt her, Callie shook the family to its core and they’ll still be dealing with the repercussions of her decision for a time to come.

Listed below are the dates, titles, and descriptions of the next four episodes of The Fosters.

Monday, January 13th – “The Honeymoon”
The repercussions of Callie’s decision to run away impact every member of the Foster family, including newlyweds Stef and Lena, who had offered to adopt the troubled teen. Both Jude and Brandon struggle with their own personal guilt about her running away. Mariana inadvertently discovers the whole story about Lexi’s upcoming trip to Honduras.

Monday, February 3rd – “Family Day”
During a family visit, a miscommunication makes things awkward between Brandon and Callie. Rita informs Stef and Lena that Callie’s plans for the future may not include them. But when a secret Callie shares with one of her housemates leads to tragedy, Callie just might reconsider her situation. Stef and Lena talk to Jude about moving forward with his adoption, and he must decide if he wants to be part of the Foster family, even if Callie does not. A gesture from Frank catches Stef and Lena off guard, and Lena attempts to convince Stef that it’s time to make amends.