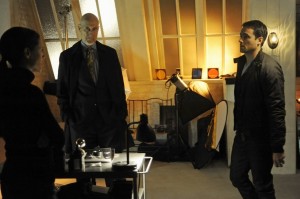 When Jack and Sara met, their futures opened up, at least in their eyes. Once living lives that they longed to be free of, complete with relationships both passionless and neglectful, the two got back the spring in their step when they got together. They began to feel hope and excitement for what was to come rather than the dread or, worse, numbness that comes with a life of being unhappy and unfulfilled, but even though Jack and Sara made it through their affair’s exposal at the hands of an errant photo, that doesn’t mean that they’re going to walk off into the sunset together. The two lived in a bubble of their own infatuation until recently and on the next episode of Betrayal, they learn just how much they have to atone for.

Specifically, Jack’s past with Thatcher, a version of himself he’s been trying to escape, has come back to haunt him, as the sins he committed while entrenched in the Karsten regime have come to the attention of the FBI. Instead of giving himself up to the authorities or being honest with Sara about the recent turn his life has taken, Jack decides to take his lady love on a weekend getaway that serves the dual purpose of getting space between himself and the Bureau. In addition to giving him a chance to plan how he’s going to approach the charges, the trip might end up being his final hurrah with the woman who made him feel alive these past months, a positive way to cap off their relationship before he has to attend to other matters.

Elsewhere on Betrayal, T.J.’s reckless behavior, rooted in grief for Brandy and anger toward his father, becomes dangerous, while Thatcher looks to get even with Jack by making a deal with an unlikely ally.

Will the FBI catch up to Jack on his weekend with Sara? Just how far will T.J.’s recklessness go before someone pulls him back from the brink? Who will Thatcher make a deal with in order to get back at Jack?