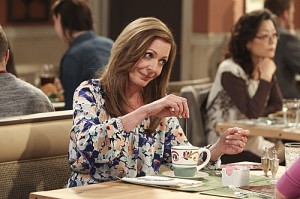 CBS has revealed that they will be encoring the series premiere of The Crazy Ones, Mom, and Hostages Saturday, September 28th, beginning at 8:00.

The first single-camera comedy CBS has ordered in several seasons, The Crazy Ones stars Robin Williams as advertising genius Simon Roberts and Sarah Michelle Gellar as his Type-A daughter Sydney, who was recently named partner at their firm. While the two butt heads in terms of approaching to their clients and the philosophies that guide the way they conduct business, things always end up working out well for them, considering that they balance the other out and provide prospective clients with two very different (yet valid) ways of helping their business.

Repeating at 8:30 will be Mom, where Anna Faris portrays Christy, a newly sober single mother who works as a waitress in Napa Valley. The Chuck Lorre-created comedy, which had a modest opening this past Monday, finds Christy having to sort out her increasingly complicated life – her mother Bonnie, a fellow addict; her affair with Gabriel, her married boss; her two children, a mature-beyond-her-years teenage girl and a blunt little boy; and her strained relationship with her son’s irresponsible father. Can Christy find some way to balance everything going on in her life and manage the temptation she faces every single day at her job?

The first episode of political thriller Hostages will then air at 9:00. From producer Jerry Bruckheimer, the series stars Toni Collette as prominent surgeon Dr. Ellen Sanders, who has been personally selected by the President to perform what should be a routine operation. However, Ellen and her family are soon taken hostage by rogue FBI Agent Duncan Carlisle; he orders Ellen to assassinate the President while she’s operating on him or else he’ll kill her family. While the death would be painless and there would be no way to trace it back to her, Ellen doesn’t know if she would be able to live with herself after knowingly taking another person’s life. Will Ellen go through with the operation and save her family?

Mom airs Mondays at 9:30 on CBS, with Hostages following at 10:00. The Crazy Ones, meanwhile, will air its series premiere Thursday, September 26th at 9:00 following the one-hour season premiere of The Big Bang Theory.

Will you be watching any of The Crazy Ones, Mom, or Hostages this season? Are the three scheduled as well as they could be? Should more networks new series that have soft openings in order to increase exposure/sampling?