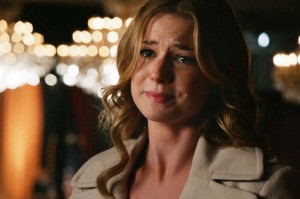 While Emily’s quest for vengeance against the Graysons was reignited last season on Revenge, she lost one ally in her increasingly fallow inner circle, as she came clean to Jack about her true identity to get him to drop the gun and avoid publicly assassinating Conrad. Already feeling burned by the lies he’s discovered elsewhere, Jack understandably feels the need to distance himself from Emily, as he has to reevaluate everything that he’s been through for the past two years and decide if any of it was real after all. What he thought was the only solid thing in his life (his relationship with Amanda) has turned into something that was built on a bed of lies, altering the way he perceives not only their entire relationship, but his feelings on her passing.

However, all is not lost for Emily, as Jack has decided to avoid spilling the beans on who she is and why she came to the Hamptons in the first place. Not yet, anyway.

Listed below are the dates, titles, and descriptions of the first three episodes of Revenge‘s third season.

Sunday, September 29th – “Fear”
The summer season kicks off in The Hamptons as Emily Thorne’s course of revenge is renewed and set against an unexpected timeline. Meanwhile the return of Victoria Grayson’s son brings changes and complications to the all-powerful family. And a glimpse into the future shows that the wedding of the century may lead to Emily’s ultimate demise.

Sunday, October 6th – “Sin”
Emily’s next target takes her into unchartered, sacred terrain, now that the former Grayson Global executive is a reformed clergyman. Victoria makes a bold move with Patrick, and Margaux presents Daniel with an intriguing proposal.

Sunday, October 13th – “Confession”
With a new lease on life, Nolan throws a housewarming party worthy of The Hampton’s elite, but an unexpected guest leads to a showdown that sends shockwaves through the community, while Conrad’s mortality causes him to question his sins.

The third season of Revenge is set to premiere Sunday, September 29th on ABC.

Will you be watching Revenge this season? Do you think that Conrad will ever atone for all the destruction he’s caused in his rise to power? Is Emily going to get closer to exacting her revenge against the Graysons?