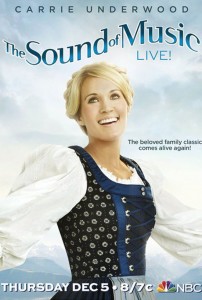 NBC’s live production of The Sound of Music is definitely drawing of some serious Broadway power.

While it’s been known for almost a year that six-time Grammy winner Carrie Underwood will be starring in the project as Maria, and more recently that True Blood‘s Stephen Moyer will portray Captain Georg Von Trapp, the rest of the cast has been unnamed.

Until today, when NBC announced that Christian Borle (Smash), Audra McDonald (Private Practice), and Laura Benanti (Go On) have been added to the cast.  All three are veterans of TV, and Tony Award winners!

McDonald, a five-time Tony-winner as been cast as Mother Abbess, Benanti as Elsa Schrader, and Borle is slated to play Max Dettweiler.

According to NBC, the three-hour Sound of Music telecast is based on the original 1959 Broadway production, not the 1965 film adaptation, though comparisons to Andrews’ performance are nonetheless inevitable.

The telecast is currently set to air Thursday, December 5th at 8/7c PM.

What do you think of the casting?  Hit the comments below!