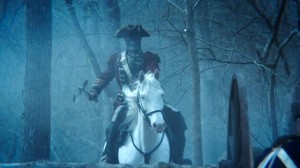 Though it’s gotten a lot of notice for the events that were purported to happen within its borders, the little town of Sleepy Hollow wants to move away from its reputation and embrace its identity as a quiet little northeastern nook. For too long, its citizens have been beholden to the myths, legends, and real-life tales of horror that have followed from generation to generation, but whispers of the town’s hallowed secrets have died down recently, restoring a peace that many haven’t known before. However, on the series premiere of Sleepy Hollow, whatever serenity that the town was experiencing gets shattered when Revolutionary soldier Ichabod Crane wakes up 250 years in the future and finds that he is responsible from stopping evil from enveloping Sleepy Hollow once and for all.

All he knows about his trip forward in time is that he has to unravel a mystery that traces back to the founding fathers. In order to collect the information that he needs to solve said mystery, which puts Sleepy Hollow right in the center of the action, he’s going to have to team up with Abbie Mills, a local police officer who has experience with supernatural phenomena and becomes Crane’s only ally in the battle for control of the town. The two will be fighting against the Headless Horseman, who was sent forward in time along with Ichabod and turns out to be the first of the Four Horsemen of the Apocalypse; thankfully, they complement each other well in terms of their individual abilities, though they better hope that their personalities mesh well, because the two of them are all that stand between Sleepy Hollow and an increasingly vicious cycle of evil tightening its clutches on the town, potentially crushing every last bit of good remaining. Can Abbie and Ichabod defeat the Headless Horsemen and halt the impending storm of evil from destroying Sleepy Hollow?

The series premiere of Sleepy Hollow airs tonight at 9:00 on FOX. You can check out three promos for the series here.

Will you be watching Sleepy Hollow? How long do you think a concept like this can sustain itself? Is there such a thing as being too over-the-top for a show like this?