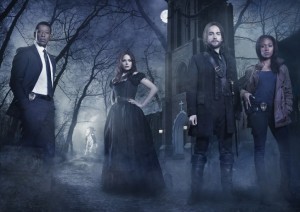 The last thing that Revolutionary soldier Ichabod Crane remembers was being on the battlefield. When he awakens from what turns out to be a pretty sound sleep, though, it’s the year 2013 and he’s been tasked with solving a centuries old mission using the happenings of tiny Sleepy Hollow and the resources local detective Abbie Mills has at her disposal. The two are up against the first of the Four Horsemen of the Apocalypse in the Headless Horseman, who is wreaking havoc all over town and stirring up the type of trouble that the citizens of Sleepy Hollow thought was long gone; if the evil that has begun to infest their town again is going to go away, though, Abbie and Ichabod will have to work together, albeit in secret, since no one believes her that this is the real Ichabod Crane. Can the two save Sleepy Hollow from what could be an untimely end?

Listed below are the dates, titles, and descriptions of the first three episodes of Sleepy Hollow.

Monday, September 16th – “Pilot”
After being resurrected and pulled two and a half centuries through time, Ichabod Crane (Tom Mison) finds himself in modern-day Sleepy Hollow, where he quickly realizes that evil has awoken with him. When Sheriff August Corbin (guest star Clancy Brown) is killed by the infamous Headless Horseman, Ichabod forms an unlikely bond with Detective Abbie Mills (Nicole Beharie), a young cop who has her own childhood supernatural experiences. Together, the two embark on a mission to stop evil and uncover mysteries dating back to the founding of our country. Captain Frank Irving (Orlando Jones) hesitates to believe Ichabod’s tales of supernatural evil. But when Ichabod’s former wife, Katrina (Katia Winter), provides clues about impending evil, they all begin to realize that this town is anything but sleepy.

Monday, September 23rd – “Blood Moon”
Still adjusting to his 21st century reality, Ichabod Crane and Detective Abbie Mills move forward in their mission to unravel the mysteries lurking in Sleepy Hollow. A frightful vision from Ichabod’s former wife, Katrina, sends the unlikely duo on the hunt for a vengeful witch from the 1700s who has been awoken by unknown evils and is on a path of destruction in the quaint town. Meanwhile, despite all odds, Officer Andy Brooks (John Cho), is back and on a questionable mission of his own.

Monday, September 30th – “For the Triumph of Evil”
Another soldier in the army of evil, the Sandman, seeps into the dreams of the residents of Sleepy Hollow. By infiltrating their minds at night, he tortures them to the brink – all because they, at one time, turned a blind eye to justice. When the Sandman seemingly sets his sights on Abbie, she is forced to begin to face her past – and her institutionalized sister, Jenny (Lyndie Greenwood). With Ichabod by her side, and her life at stake, the duo must try to defeat the Sandman and continue their fight against evil.

Will you be watching Sleepy Hollow? How long will it take Ichabod to adjust to living in the 21st century, if he ever does? What do you think Officer Brooks is doing back in the department?