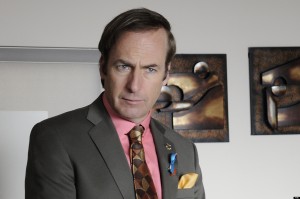 AMC and Sony Television have reached a licensing agreement on Better Call Saul, the tentative title on the Breaking Bad spinoff set to follow lawyer Saul Goodman. While the project has yet to officially be ordered to series, reportedly due to final negotiations between Sony and Breaking Bad creator Vince Gilligan, Peter Gould, and star Bob Odenkirk, it is said to be a one-hour series set before the events of Breaking Bad and will tell the story of how Saul became who he was and the man he was before he became Walter White’s attorney.

Better Call Saul always had a good chance of getting on the air, considering the popularity of the character and AMC’s desire to continue doing business with Vince Gilligan, but once Breaking Bad shattered its ratings records for the final half of its fifth season, it was a guaranteed pickup, especially considering the cancellation of The Killing, underwhelming ratings for Low Winter Sun, and the impending departure of Mad Men. However, whether the show will be a success or not remains to be seen, as television spinoffs have historically been hit or miss, especially with it comes to spinning off dramas.

There could also be the chance that while Saul’s character is popular and a good source of comic relief in the darkness that is Breaking Bad, it’s not enough to build a series around and even a series of Breaking Bad-related cameos from those who survive the series might not be enough to draw outside interest. Working in the show’s favor, though, is just how beloved its mothership has become during its five season run and the ratings high that it’s going out on, which could bleed over to the spinoff and give it a pretty sizeable launching pad. But who will be joining Saul in the spinoff?

Breaking Bad airs Sundays at 9:00 on AMC, with the series finale scheduled for Sunday, September 29th.

Would you watch a spinoff focused on Saul? Which characters from Breaking Bad would you like to see appear on the series? Can something like Better Call Saul escape the enormous shadow of Breaking Bad and find an audience of its own?