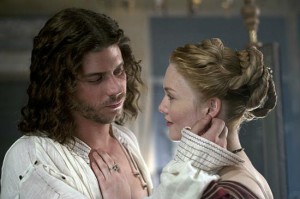 Fans of The Borgias might not be getting the promised fourth season or a two-hour wrap-up movie following the show’s cancellation, but there will be some semblance of closure to the period drama, as Showtime has announced the impending release of an e-book. Said to be based on creator Neil Jordan’s script for a movie follow-up to the three-season look at Italy’s infamous crime family, The Borgias: Apocalypse will be available this week on all major e-retailers.

The Borgias was suddenly canceled earlier this summer, mere weeks before what would turn out to be its series finale. With no time to recut the finale or do any reshoots, the ending had its share of loose ends and interesting threads left unexplored; the reason given at the time of the cancellation was that the series had reached a natural resting place, but at the Showtime TCA session, executive David Nevins admitted that the network opted to invest its resources into properties with the opportunity to grow. Unfortunately, it seemed that The Borgias was a victim of having a loyal audience on a growing network, as their numbers reportedly stayed about the same from season two to season three while other Showtime series (Dexter, Nurse Jackie, Homeland, Shameless) hit series highs in their most recent outings. Combine a lower ceiling with an expensive production and little awards (and critical) attention and it was an unfortunate cancellation that left the series one season short of its initial four-season plan.

Will you be downloading the Borgias e-book? How much closure do you expect to find from the repurposed movie script? Do you think there’ll ever be a fourth season of The Borgias?