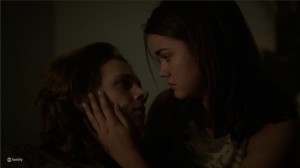 Callie is in a difficult place now that she knows about Brandon reconnecting with Talya. She was talked into expressing her true feelings by Wyatt, who knew that her heart wasn’t completely in their fledgling relationship, only to see her foster brother being comforted by the girl who tried to ruin her life. Granted, Callie has come to terms with Talya after seeing what happened with the video from the party, taken during a period where the latter was miserable at messing up her thing with Brandon, but it still has to sting knowing that she didn’t get the chance to tell him how she felt before he tied himself off with someone else. On the summer finale of The Fosters, though, Callie will have something else to worry about now that she’s completely alone.

Specifically, Wyatt is moving to Indiana with his mother, who felt as if they needed to be with their family following the foreclosure of the house. Set to leave that weekend, he’s the one friend Callie’s made outside of the house and now that he’s heading across the country, she’s left without anyone to confide in. That awkward position, in which the only people she has to talk to live in the same house and are fairly open with one another, could lead her to confess her feelings for Brandon out of a sense of desperation. Without Wyatt, she might feel like she has to go to her other option, for fear of losing him for good to Talya and as a way to make sure she still has someone close in her life. But as we know, foster children aren’t allowed to date or hook up in Lena and Stef’s house, so if she does decide to be honest with Brandon, Callie would be risking the stability that she’s finally acquired for herself and Jude over something that’s not a certainty. What would Brandon do if he found out that Callie felt the same way that he did?

Elsewhere on The Fosters, Lena and Stef’s wedding draws each of their parents to the house, resulting in tension between their mothers and questions of what Stef will do after being cleared.

The summer finale of The Fosters airs Monday at 9:00 on ABC Family. You can check out a recap of the most recent episode here.

Will Lena and Stef’s wedding go off without a hitch? How will Callie respond to Wyatt leaving for Indiana? Is the case against Liam going to be resolved during the finale?