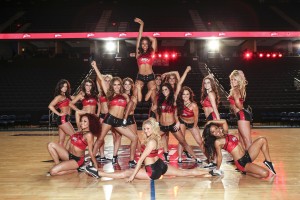 In a single moment, an entire season can change.

For hit VH1 scripted drama Hit the Floor, that moment came in the closing moments of season one’s penultimate episode when we learned that the Devil Girls squad was down one member. A body of one of the dancers had been found under a nearby bridge, thereby ripping the close-knit dance team apart at the seams and potentially bringing endless negative press coverage, investigations, and headaches to the Devils organization. It’s a moment that will change everyone on Hit the Floor both in terms of their professional and personal lives, with the future of the Devil Girls and the way the team would be run from here on out hanging in the balance, and something that will be the catalyst for a second season that will be defined by tragedy.

But here’s the thing: the episode didn’t specify who died and only flashed the faces of four Devil Girls (Ahsha, Jelena, Kyle, Raquel) on screen during the promo for the season finale. So who’s the likeliest dancer to meet her maker on Monday’s episode?

Obviously, we can very quickly rule out the possibility of Ahsha being the (likely) homicide victim using the rules of TV 101. Ahsha is the main character on Hit the Floor, the eyes with which we’ve born witness to a plethora of scandal and salaciousness, and her character arc has only begun now that she’s broken up with German. She’s the center of the show’s main love triangle and arguably the only “good” person on the show, meaning that the show would have to radically change its tone and shift its perspective in order for her to be the body found floating. Say what you want about Ahsha as a character or as a person, but she’s been the audience’s window into the Devils world and she wouldn’t be taken out right before she began the downfall that will come from being sucked into the world her mother warned her about.

Also with a very low chance of being the victim is Jelena, Hit the Floor’s main villain and Ahsha’s underhanded rival. Make no mistake, Jelena will likely receive some serious comeuppance for the way she’s treated all those around her since ascending to the role of Devil Girls captain, but like Ahsha, it’s too early for her to face the music. Ironically, she and Ahsha exist because of each other, in that a show with one and without the other wouldn’t seem right, considering how much time they’ve spent on the rivalry this season and how the show has seemingly set up their tense dynamic as a series-long push-pull rather than a season-long arc. Unless they have a role in mind for the next Devil Girls captain and that person is bigger, badder, and more manipulative than The Great Jelena Howard, look for her (and her unresolved issues with Terrence) to carry over into a second season.

I’d understand if people thought that Kyle was the one most in danger, but I believe that the set up they’ve been doing on her money troubles and prison connection, as well as the ominous note from her billionaire hookup, are a narrative misdirect meant to make us think she’ll be the victim. Whereas Ahsha is the main character and Jelena is the primary antagonist, Kyle is the energetic comic relief of Hit the Floor and someone whose personal history has unraveling in the last few episodes. Had we been clued in on her primary objectives and the reason she needs the money from the beginning, I would be on board the idea of thinking she would be the one killed, but from the way the show has gone, it feels like they’re only just beginning to explore who this woman is and why she’s so desperate for that exact dollar amount. Killing her would be the definition of a dramatic anticlimax and would rob the show of a good source of its energy, so to keep things from being too much of a downer (like the murder of a more comedic character tends to be), pretty Kyle seems to be sitting pretty. For now.

If Hit the Floor was any other genre of television show, I would think Raquel would be toast. Her death would have much more emotional resonance than Jelena and since her character isn’t tied as much to the main goings on around the Devil Girls, her loss wouldn’t be as felt as Kyle’s or Ahsha’s would be. However, she still has connections to the Devils world and thus, a demise would greatly impact Ahsha and Pete, whose changes in demeanor would have reverberations throughout the entire show. And there’s already a prime suspect in villainous Jesse, who would either go after her or send someone to do the job in order to get the compromising video that she took of him and a potential client; it’d be a cut-and-dry case where we’d feel the loss without feeling the loss, so to speak, and get to have a black and white opinion, since Jesse is a wholly unsympathetic character. However, if Raquel were to be killed right as she got sole custody of Miguel, that would be pretty dark and contrast sharply to the soapy tone of the show. Although I do like Hit the Floor quite a bit, I just don’t buy that they’d go there, not when they’ve spent nine episodes purposefully being escapist television on basic cable.

So, if it’s not any of the four women that were teased as being possible victims, who could Hit the Floor bump off?

I fully believe that we’ve seen the last of Mia on the show and that her body will be the one we see on the season finale. It might be the safest choice, but it makes the most sense and feels the most in line with the show Hit the Floor has been this season. After giving up the tape to Oscar, it’s completely within the realm of possibility that he hired someone to take her out and make sure she doesn’t speak to anyone about what she knows. That would be good dramatic housekeeping, as I’m not sure how much longer Mia’s arc could stretch once all evidence of what she knows gets erased, and sad enough to have impact now that we know what she was put through and just how corrupt the Devils organization actually is. Mia’s information is out there after telling Sloane what happened, ratcheting up the tension between her and Ahsha and the suspicion she has of Olivia, and though her death might not be the most emotional of the five, considering how far she’s removed from the main action, it would greatly impact the Devils organization and shake up the Devil Girls lockerroom quite a bit. Additionally, and most sadly, it just seems like an appropriate way for her character’s time on the show to end, a tragedy without truly rattling the status quo.

The season finale of Hit the Floor airs Monday at 9:00 on VH1. You can check out a sneak peek of the episode here.