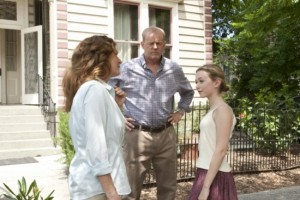 At their TCA session today, HBO announced that the final season of David Simon’s Treme is set to premiere Sunday, December 1st at 9:00. Season four of the New Orleans-set drama will have five episodes, half of the usual 10-episode order.

The late start is due to True Blood‘s reduced episode order booting the start of Boardwalk Empire up by two weeks and the decision to air Eastbound & Down and new comedy Hello Ladies following the Prohibition drama. As such, Boardwalk will wrap its fourth season on November 24th, with Eastbound & Down and Hello Ladies doing so a week prior, pointing to HBO doubling up on Treme episodes for two weeks. The final episode of the Emmy-nominated series, which stars the likes of Melissa Leo, Clarke Peters, and Khandi Alexander, will likely bow on Sunday, December 15th.

Of course, there’s always a chance that the network will run the episodes on a weekly basis and into the following month, though considering how viewership declines in the United States in late December, it would make more sense to double up. There’s also no word on whether the series finale of Treme will be extended beyond the normal hour timeframe; the series has exceeded the bounds of pay cable dramatic time limits on more than one occasion.

Had HBO decided not to bring Treme back this year, it could have slid into the January drama spot that was vacated by Luck in 2011. The network opted not to bring a drama into their first quarter last year in replacement of the canceled horse racing drama and used buzz-y comedies Girls and Enlightened instead. With Enlightened canceled and the ratings for Girls down, it seems like HBO will bring detective drama True Detective into the mix in 2014, possibly sandwiching Girls in between it and a new comedy.

Will you be watching Treme this season? What do you think will happen during the fourth season? How should the show come to an end?

EDIT: According to The AV Club, Treme will be airing on a weekly basis, meaning that the series finale is scheduled for December 29th. Apparently HBO’s apathy toward the show outweighs any concerns they might have about poor late December ratings.