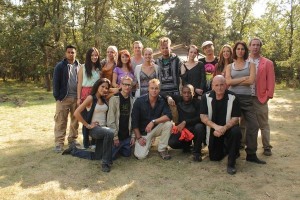 NBC has released the first official trailer for Siberia, its recently acquired 13-episode drama series. The show centers on a reality television taping in northern Tunguska, Siberia, where 16 contestants are vying for a lucrative prize package and the type of infamy that comes with being on a reality-competition series. However, when one of them becomes critically injured, they see that they’re not fighting for money or attention – they’re fighting for their lives, as no help arrives and soon it becomes clear that the reason they were brought there wasn’t to film a television show. While the contestants must band together to survive their time in Siberia and come out on the other side of their reality TV experience, that proves to be easier said than done, with the already small group fracturing off and falling in on itself.

It should be interesting to see whether Siberia, which seems compromised of elements from Lost, Survivor, Lord of the Flies, and Paranormal Activity, can find an audience in the summer, particularly against fellow genre offerings Under the Dome and Teen Wolf. The series features no name-actors and leans on the found footage style of filming that has made in-roads at the box office but hasn’t done any damage on television, making its odds of success slightly smaller. However, this seems to be the type of flashy, big-tent, close-ended programming that the networks should be going after for summer runs, lest they lose any more audience to cable, and it might be just different enough to get sampled.

Will you be watching Siberia? Do you think that there’s an audience on television for a drama with a found footage/camera crew element? What do you think the big mystery of the show is?