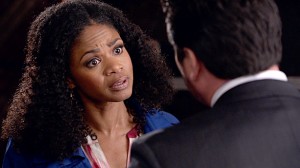 The first Devils home game on Hit the Floor should have been a triumphant moment for Ahsha. She achieved something that she had long wanted to do and would now be embarking on a similar path that her mother took, able to show her stuff in front of an arena crowd dozens of times a season and center her life around her favorite thing to do: dance. It would be tough and it would hurt, but she’s ready for the growing pains; however, when Jelena revealed to her that Pete Davenport is her father, the joy of heading out onto the floor for the first time as an official Devil Girl was taken away and replaced with the realization that her entire life, to that point, had been a lie.

On the next episode of Hit the Floor, Ahsha confronts Sloane about finding out the secret before storming out to parts unknown and Sloane immediately thinks that Pete had something to do with their daughter’s current disposition. However, Pete’s not the one who said something – he barely knows how to be in the same room with Ahsha, let alone inform her of something so personal, so it’s now up to him and Sloane to piece together who could have picked up on the knowledge and had a reason to tell Ahsha. Is there a chance that they key in on the rivalry between Jelena and Ahsha and realize that the Devil Girl captain would do anything to bring the promising new member down?

Elsewhere on Hit the Floor, Kyle rebels against Olivia’s dating rules, while Raquel takes a stand against Jesse and Derek and Terrence clash over the former’s party boy lifestyle and inability to take his importance to the team seriously.

Were you surprised that Ahsha already found out that Pete was her father? How do you see the conflict between Terrence and Derek going this season? Is there a chance that Mia could return to town and make life hell on Jelena?