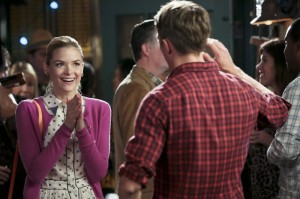 The CW has announced that it has renewed southern dramedy Hart of Dixie and fantasy romance Beauty and the Beast for their third and second seasons, respectively. The duo join The Vampire Diaries, Supernatural, and Arrow on the 2013-2014 schedule, as the three genre shows have already been renewed.

Both Hart and Beauty were firmly on the bubble this season, though steadiness and continued streaming strength in the former and the latter’s dedicated fanbase, tonal fit with the network’s largely genre pilots, and flexible procedural nature put them over the top. While episode numbers weren’t revealed, each should find a place on the fall schedule; it’ll be interesting how they’re scheduled, though. Hart very much has its core audience, but it doesn’t make the best lead-in for new material, so the network could stick it in a problematic 9:00 slot and try to launch a new show in front of it. Meanwhile, Beauty has put up pretty respectable numbers this season, but it doesn’t hold enough of its Vampire Diaries lead-in to stay in its Thursday slot. Though it may seem destined to move to Fridays at 9:00 to join Nikita, stranger things have happened, so how The CW uses it next season is something to pay attention to.

The network also picked up The Originals to series following its debut last night. The show, a spin-off of The Vampire Diaries, takes place in New Orleans and features the likes of Joseph Morgan, Phoebe Tonkin, and Daniel Gillies. Its place on the fall schedule was a foregone conclusion from the time it entered development, with its name brand, marketable cast, and potential tie-ins with its parent show, in addition to possible (likely?) strong DVR, iTunes, and streaming numbers.

“As soon as we saw last night’s episode of The Vampire Diaries, we knew we wanted more of The Originals – Julie Plec and Kevin Williamson have done a fantastic job with The Vampire Diaries, which is as fast-paced and well-written as ever, and Julie has created an equally compelling world for The Originals,” said Pedowitz.  “We’re also very excited to bring back Beauty And The Beast and Hart of Dixie for next season – both series continue to be creatively strong and compelling, and their fans are incredibly passionate.  I’m very happy to have all three series on the schedule for next season.”

Not receiving a renewal (yet?) were Nikita, which is rumored to be returning for a shortened final season, and The Carrie Diaries, whose poor live ratings could be aided by strong online numbers and iTunes sales.

Do you think that The CW made the right decision in renewing both Hart and Beauty? If you were in control of the network, how would you schedule The Originals next season? Will Nikita and/or Carrie receive a renewal?