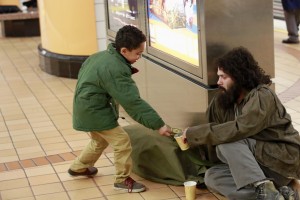 Huck has always been the member of Pope & Associates that, for every fact you learn about him, raises three more questions. His back story has been more fleshed out than, say, Harrison, but it’s apparent that there’s much more about the tech guy’s former live than meets the eye. On the next episode of Scandal, it looks like we’ll get to explore the man he was before Olivia saved him and brought him into the fold at the firm, but will he be able to handle the memories of his past being brought up?

In a sneak peek from Thursday’s episode of Scandal, we don’t get to see Huck as the homeless man he was before being thrust into the orbit of Olivia Pope, but there’s a (very) minor hint about something that could connect to his past. While Quinn, Abby, and Harrison are regrouping after finding out about Olivia’s concussion, Huck is in the corner of the room, repeating “seven fifty-two” over and over again. What could be the significance of the number that his mind goes to it upon having his security blanket and protector ripped away from him? Is finding out the place that seven fifty-two comes from going to present a fuller view of who Huck is, was, and might eventually be?

Elsewhere on Scandal, Fitz’s visit to the hospital turns emotional and someone might have heard his words to Olivia, while Cyrus begins to grow skeptical of Jake and Mellie makes a decision that could bring down the White House and permanently fracture her husband’s administration.

What do you think will be revealed about Huck’s past? If Jake overhears Olivia and Fitz talking, would he begin spreading the word about what was said? Is now the time when Mellie makes her stand about Fitz and Olivia?