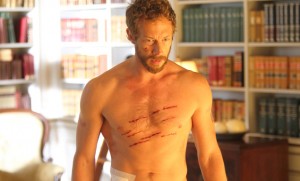 When Bo’s attempt at feeding Tamsin chi from a guard protecting Isaac’s facility doesn’t work, she brings the Valkyrie back to her place so they can reboot and think of another plan. Once there, Amanda and Casey (two members of the sorority that Tamsin protects) inform the succubus that Tamsin is approaching the end of her life cycle, hence the clumps of hair that are being pulled from her scalp. The way of the Valkyrie is to live, serve, and expire; being that Tamsin is a mighty old Fae, she’s closest to the third of that series. When she awakes, though, Bo confides in her a plan to gather the guards at Isaac’s and have her use her power to let them inside. Being that Tamsin isn’t 100%, she can’t go full tilt and needs to power up in order for this to work.

They get a syringe from the druid that will bring Tamsin back to full working capacity, if only for a short time, and while Bo is trying to make a call, he gives the Valkyrie the bottle of hair collected from Dyson, Lauren, and Bo. At Isaac’s facility, Lauren finds out why the man she thought was so sane and so wise is hunting down Fae and keeping them locked away at his disposal. When he was young, Isaac and his little brother went camping, with the brother being decapitated during the night. Isaac ended up being blamed for it and sent to an asylum, where he developed an immense hatred of the Fae and, upon being released, tortured a Wendigo for the sins of its people. He tells Lauren that if she were to flee the compound, there’d be no protection for her and that he wants her to help him ascend by injecting stem cells from Dyson into his body.

Bo and Lauren make it into the compound by intentionally getting apprehended by the guards and end up in Isaac’s office, where Bo demands for Dyson to be freed.Then, Lauren comes out of the shadows and laments that she knew her girlfriend would come for him, going on to say that the Fae have ruined her life and that she was going to perform the surgery on Dyson. She wants to do something meaningful with her life and since the Fae have become human bloodthirsty, she doesn’t have her position with the Ash to fall back on anymore. At least at Isaac’s, she can have a chance at transforming humanity, saving her own kind, and taking out the man who has stood in her way for far too long. While Bo is stunned and taken back to her cell, Lauren preps for surgery and Dyson remains secured to the operating table after taking out six of Isaac’s men.

Once in the cell, Bo sees Efa across from her and her mother denies having anything to do with her apprehension, confessing that she told Isaac about Dyson instead. She also mentions Bo’s father and how he wouldn’t have let what was going on happen, angering Bo and causing her to inject Tamsin with the solution that Massimo gave them, feeding off of her as a result. The two draw the attention of the guards with a fake fight, long enough to get them out of the cell and Tamsin to use her power to knock them all unconscious. With no energy remaining, the Valkyrie slumps against the wall of her cell while Bo frees the other captive Fae, intent on charging on Isaac and finding Dyson. Only, Isaac is already out of surgery, which was obviously a success given his newfound speed. He makes a move on Bo and attempts to stab her, Efa jumping in front of her daughter and taking the punishment instead. Dyson comes into the office, kills the guard inside, and hears Bo demanding that whatever Isaac turned into needs to die; he then leaves to find the doctor and exact vengeance for the dying Efa.

However, Efa snaps right back to life and seems to be in her normal frame of mind after the time at the compound took her sanity, as she drains Dal bartender Jerry’s wife Sunitha (a Cabot). Meanwhile, Bo and Tamsin make it into the operating room looking for Dyson, only to find it empty. Tamsin reveals her true allegiance and throws the bottle of hair on the ground, expecting it to have a major impact. It doesn’t, though, and the two have a physical fight that damages the room and nearly ruins their friendship; however, Bo won’t finish her off. Instead, she talks Tamsin down and into the idea of regrouping somewhere, tasking the Valkyrie with finding Dyson while she goes after Kenzi.

Dyson chases Isaac into a nearby field where he reveals that Lauren didn’t inject her boss with wolf DNA. She injected him with Cabot DNA, meaning that he’s much weaker than he thought he would be and much easier for Dyson to catch. After the wolf kills him and eats him, he runs into Tamsin in her trunk and the two escape the compound for good. However, she seems to have a death wish and tries to hit a figure in the road with the vehicle, only for it to dissolve and the truck to flip over an embankment.

Bo heads to the empty Dal, the doors locking behind her and the same song that played during her Dawning being played. The song emphasizes the line about being a wanderer and a tarot card falls from the sky – the Wanderer. Suddenly, there is a series of explosions and a cloud of black smoke that envelopes the succubus and makes her disappear to parts unknown.

A Poet Named Bruce
While Bo is off trying to save Dyson, Kenzi is being held at the Dal by the Morrigan and her henchman Bruce in hopes of providing her with information on the succubus’ lineage. After telling her that Trick is dead and that Hale left her behind, the Morrigan still doesn’t get anything out of Kenzi and finds that the Blood King used a protection spell to keep his companion safe. It blunts the impact of a taser and keeps her alive long enough for her to forge an alliance with Bruce, who is tired of being the Morrigan’s whipping boy. She patches up an arm wound of his and he tells her that Hale slipped the Twig of Zamora into her pocket, ensuring her immortality for as long as she had it in her possession. The Ash also plays a hand in getting Trick to a safe location, freeing him from the trunk and sending him to Scotland with Stella until the conflict is over. Hale called in one last favor for his run as the Ash, getting Vex to bound and gag the Morrigan and use her taser on her.

Meanwhile, Kenzi and Bruce leave the Dal and she tells him about her decision to become Fae, driven by her need to be the one rescuing her friends rather than it being the other way around. He disagrees and the two speed off in the Morrigan’s luxury vehicle.

Additional thoughts and observations:
-“Every kick from your boot is bliss.”
-“Unaligned and unbelievably duh, am I right?”
-“OMGG – the extra G is for glitter.”
-“You should thank your hips.”
-“I normally don’t do virgins.”
-“Whatever he is needs to die.”
-“All I just heard was old.”
-What kind of cliffhanger-fest was that finale? Great episode, but oh my, everything is left up in the air. Tamsin and Dyson may be dead (I’m betting she dies, fulfilling her death wish, and he escapes), Bo disappears to who knows where, and Kenzi is off trying to find something that she doesn’t need. At least Hale and Trick are somewhat more at peace.
-Efa holding her stomach when talking about Bo’s father and her “seed” made me think she was pregnant for a second, but I think that was her way of talking about Bo. I think. I hope.
-Speaking of, do you think that Efa will be a part of the fourth season, since she’s still alive? Or will they hold her back like they did after season one’s presumed death and use her later in the series?
-I’d watch a spinoff series of Amanda and Casey interacting with other Fae and fighting about who gets to sleep with Fernando.
-So Lauren has taken a bit of a heel turn, eh? I wonder if that extends into next season or if they’ll drop it in favor of her saving Bo, thus rekindling their relationship.
-Although I think Bo and Tamsin work very well together as characters, I have to admit, their fight was pretty awesome.
-I always knew that The Beach Boys were evil. And now I have proof.
-Thank you guys for reading and sharing my Lost Girl recaps. I picked up the show because I think it doesn’t get nearly enough media attention and I had fun writing about it during the little bit of the season I was able to cover. Hopefully I’ll be able to start from the beginning of season four and cover the entire thing, so see you then?