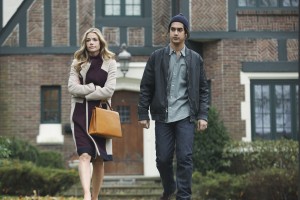 The Hollywood Reporter has revealed that upcoming ABC Family mystery Twisted has added two members to its cast. True Blood alum Jessica Tuck will play Gloria, the uptight and controlling mother of a deceased student, while Robin Givens (Chuck) is set to portray Judy, Lacey’s hip and outgoing mother who belongs to the same social circle as Gloria. Both are said to make their first appearances in the same July episode.

Twisted tells the story of 16-year-old Danny Desai (Avan Jogia) who returns home from a 5-year stint in juvenile hall, which he was sentenced to following the murder of his aunt. When he returns to his hometown, unable to leave with his mother for financial reasons, Danny finds that he’s the town pariah, everyone either too afraid to speak to him or bold enough to make fun of him to his face. Not even his former best friends will give him the time of day, but that all changes when one of their classmates turns up dead and all eyes to turn Danny. The entire student body (and really, the entire town) thinks that he’s involved somehow, so it’s up to him to clear his name and prove that he’s not the cold-blooded sociopath that everyone has pegged him as. The show also stars Maddie Hasson, Kylie Bunbury, Denise Richards, Ashton Moio, Kimberly Quinn, and Sam Robards.

In addition to her time as Nan Flanagan on the HBO vampire soap, Tuck has appeared on the likes of One Life to Live, Switched at Birth, and Saving Grace, while Givens’ credits include Suburgatory, Reed Between the Lines, and Drop Dead Diva.

Will you be watching Twisted this summer? How will Danny be able to prove his innocence to everyone in town? Is he going to have to patch things up with his former friends if there’s any hope in figuring out who really killed their peer?