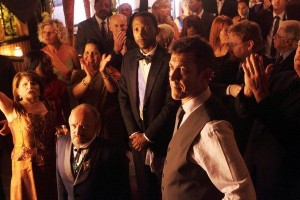 Bo doesn’t have a good feeling about Lauren’s absence. Although people keep telling her that the good doctor merely needs some space and that she’ll be back soon, finding Lauren’s cell phone in her apartment is disconcerting to the succubus, so much so that she has to go home and take a bubble bath. Where, of course, she’s interrupted, this time by a drunk Tamsin, who informs her that they know she didn’t kill Riley. The Valkyrie then gets in the tub with Bo (while keeping her clothes on) and calls the succubus genuine and virtuous before telling her that she shouldn’t be here – or be real.

For her part, Lauren is enjoying the time away. She feels useful working for Isaac and even though she misses Bo, she needed the time to rediscover why she loved her field in the first place. After celebrating a pivotal discovery that could lead them to a cure for heart disease, Isaac regales Lauren with the story of a serial murderer named Gabriel who didn’t kill out of spite or passion but admiration; his victims were those he deemed to be too good for modern society and who needed to, in his opinion, ascend to their rightful place. The most recent victim was a waitress who had been speared in the ribs and nailed to the diner floor in a crucifixion pose, Gabriel’s M.O., but the problem is that Gabriel is serving three consecutive life sentences in a maximum security facility. So who did it? Before he was imprisoned, Gabriel donated bone marrow and the man who received it (James, a father) found that it replaced his physical cell structure, turning him into a killer. While Isaac deems this to be a positive (i.e. curing measles, mumps, etc.), Lauren feels as if it’s a slippery slope a’la the atomic bomb; the two have their first argument about the lengths they’re willing to go as scientists, but no harm is done – yet.

Bo arrives over at Lauren’s and finds Tamsin freshly showered and eating a bowl of cereal rather than looking into the doctor’s disappearance. The two piece together that there’s a connection between Lauren and the events that happened at the Dal, the humans who took Dyson using the same disguise as Lauren used to work at Hecuba, and leave to go gather more evidence. While they’re off putting the puzzle of where Dyson is together, the wolf is locked into a chain-link cage and has to fend off a Lupercus, the mortal enemy to his species, for the entertainment of a formless announcer. Dyson is supposed to “prove his worth” through the bout and he does just that; he takes a few licks, but he ends up with the Lupercus’ throat in his hands and its body at his feet.

After finding the vial of hairs that Tamsin collected last week (and texting Kenzi a photo so that the human could do research on her own regarding its origins/use), Bo finds herself outside the place that Dyson’s being held. Tamsin uses her power to subdue the guard that shot her in the stomach, leaving Bo the opportunity to finish him off and figure out her next move; meanwhile, Lauren is sneaking through the building after continuing to feel unnerved about her new boss. She ends up passing through a door and finding bloody, bruised Dyson locked in a plexiglass container – the cage that Dyson fought in? Directly outside Isaac’s building. Before she can find a way to free him, Isaac enters the room and goes on about how this is 40 years in the making. He marvels at Dyson, proclaiming him to be magnificent and impatiently telling them that he can’t wait to be like that, and confirms that Lauren that he was indeed using her for her medical skill. He then locks her in the cell next to Dyson. Across from the two? Efa.

But why did Isaac set all of this into motion? He wants to be Fae and will do anything he can to make it happen, including pitting those he captures against one another, drugging them in a bid to extract what makes them Fae, and hunting them down like animals. The mass Fae grave that Dyson and Tamsin found last week was his doing, the bodies of those who died while in captivity at the facility.

Inauguration Gone Awry
It’s the day of Hale’s inauguration and everyone at the Dal is running around, trying to make sure things are perfect for the historic event. Hale himself decided to make the day even bigger by inviting the Morrigan to attend the ceremony, which she does, seeing as how she can’t resist a party. While he gets to bond with Dyson over good hooch and thoughtful gifts, the Ash’s inauguration takes a swift turn when human bartender Jerry shows up late and spikes Dyson’s Whiskey, leaving the wolf seizing on the floor of the Dal. Two men that appear to be Skunk Apes come rushing into the bar to pack Dyson away to safety, but Bo senses something funny – they’re actually humans who load the wolf into a black van before speeding off. Before Trick or Bo can get any information out of Jerry, he tells them that whoever’s behind the abduction has his wife and kills himself with a vial lifted from Lauren’s work with Isaac.

The crowd of Fae higher-ups immediately become thirsty for human blood and even with Hale pushing back to defend Kenzi, the Morrigan seizes the opportunity to swing public opinion in her favor. She tells the attendees that it’s Hale’s leadership that got them to this point, where a human being working under the Fae can eventually turn against them, and gets them to pass an ordinance declaring every human, claimed or otherwise, a terrorist and enemy of the state.

Meanwhile, Kenzi had been dealing with handsome Massimo, whose attempts at picking her up and convincing her of her lower-class status in the Fae world prove to be unsuccessful. In his mind, it’s unfair that the Fae push her out due to their powers, not when she’s proven herself to be quite the survivor and capable of taking care of herself. To get information on the vial of hair that Bo found, including the picture, he demands a kiss – a kiss that turns out to be rather steamy. He then exits the Dal to get Kenzi the information she needs; however, Massimo turns out to be the Druid and after getting the kiss from Kenzi, he’s one step closing to concocting the serum that Tamsin began gathering ingredients for last week.

Elsewhere, Trick manages to escape out a back entrance in the basement of the Dal, only to be picked out upside a barbershop by humans and thrown into the trunk of a vehicle. Is he on his way to the same place Lauren and Dyson currently are?

Additional thoughts and observations:
-“Does the Light always hold their inaugurations at a steakhouse?”
-“I just came here to drink all your liquor.”
-“Oh, I so hope you don’t get murdered.”
-“Dude, I live in my truck.”
-“Toodle-oo, Wankhead.”
-“Hero to dick in, like, six seconds – you are unbelievable.”
-I didn’t know whether to roll my eyes at Lauren and Isaac having the conversation about “ascending” while…walking up the stairs. Clever, Lost Girl. I think.
-Bo found the necklace that Lauren left in the drawer, which seemed to confirm that something wasn’t right. Or that the break she kept mentioned was more like a breakup.
-Shirtless Dyson will never get old. I almost needed smelling salts while he was waiting for the Lupercus to enter the cage. Also, that fight was beyond awesome.
-Hale finally admits that he views Kenzi as being more than a friend. Right before he sics a gigantic man after her to appease the Morrigan and grasp on to his remaining power.
-When Lost Girl returns in two weeks, Bo continues her quest to find Lauren and Dyson, while Kenzi has an epiphany about Hale.