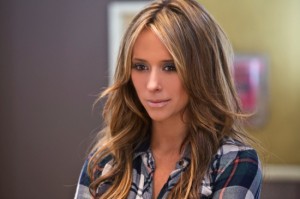 Riley Parks has been carrying the weight of the world on her shoulders and eventually, it was bound to cause her to stumble. In addition to managing The Rub, including hiring new employees, handling a police probe, and expanding its client base, she’s had to parent two children, console her best friend through fertility difficulties, take care of an injured mother, and try to keep her husband from going to jail after being involved in a Mexican drug cartel. Not to mention the fact that she’s currently keeping secrets from everyone in her life and has to hear about the inner workings of her clients, who themselves are hiding things from the ones they love. Riley may be a strong woman who has proven to have more guile than even she expected, but what happens when one of her many secrets accidentally comes out – to her children?

On tonight’s episode of The Client List, Katie saw Riley and Evan kissing and she informs pretty much everyone in the extended Parks family sans Kyle. Granted, Lacey and Linette both knew that Riley had a thing for Evan and that the two were in that weird gray area between being officially together and being more than friends, but Riley wanted to keep her dating life out of her childrens’ minds, especially since Kyle is still locked away. The last thing she’d want for them to feel is that she was replacing their father and that they’d never get to see him again, so this might lead to a brief pause in the development of her relationship with Evan. However, considering that he became quite friendly with Shelby during his police academy training, Riley might want to think about making a move before someone else stakes their claim on Evan Parks first.

Elsewhere on The Client List, a co-ed locker room makes for awkward encounters between Derek and Selena, while Riley has a 18-year-old virgin on her table, Travis begins acting up in school, and Lacey visits a fertility specialist with Dale.

Should Riley be relieved that her secret with Evan is out in the open? Will Kyle eventually come around to the idea of Riley being with Evan? Is the current awkwardness between Derek and Selena a symptom of mutual attraction?