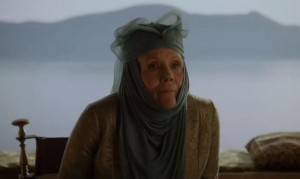 Tonight on Game of Thrones “Dark Wings, Dark Words” we meet Margaery’s grandmother and perhaps the real reason that Margaery seems so eager to take a seat next to Joffrey on the throne. Is it as nefarious as we think or might they have other plans in mind?

What about Sansa, can she trust the Tyrells or will her head soon be sharing a place of honor somewhere next to her beloved father Ned Stark’s?

Elsewhere, Arya and her friends are out in the woods trying to get to safety, but safety has a way of eluding them. Can they escape the biggest danger or will it find them when they aren’t even looking?

Osha is certain someone is tracking Bran, but how could anyone know where they are? They left no footprint behind and are as far from civilization as they can get in the seven kingdoms. What kind of a creature could raise the hackles on Summer and will she be enough to save the lost group as they ramble along?

Brienne is doing her best to protect Jaime as she takes him to King’s Landing to trade him for Sansa and Arya, but Jaime makes it more difficult than necessary with his jabs and barbs. Will Brienne be the one to take him out of will the kingslayer be his own doom?

This week proves that what you expect is never what you get on Game of Thrones and if you think you’re close to safety, more likely than not you’ve just moved closer to darkness and danger than you’ve ever imagined. Meet new friends and encounter old enemies as you watch “Dark Wings, Dark Words” and always be prepared for who may be watching you when you aren’t looking. Even they may not know just what, or who, it is is that is right in front of them.

Check out a clip of tonight’s episode and hurry on back here for a recap and review after the ET airing at 10:00 PM.