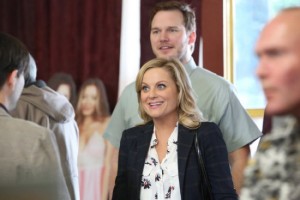 The Pawnee Parks Department is about to lose one of its own. Jerry (Gary?) Gergich has officially decided to retire to a life of relaxation, quality time with Gayle, and zero insults from his co-workers. His absence will also force one member of the Parks Department to assume his role as office punching bag and main target of everyone’s ire and frustration, which Jerry has acted as for quite a while. While Jerry may have gone along with the joke out of love for his friends, a desire to keep the workplace harmonious, and a loving home situation waiting for him at the end of the day, the next person in line might not have the same attitude. Which of the Parks and Recreation gang, in particular, is sweating the possibility of becoming New Jerry?

Listed below are the dates, titles, and descriptions for the next four episodes of Parks and Recreation, including a double-bill on April 18th.

Thursday, April 18th – “Article Two”
Leslie works to get rid of outdated laws from the original town charter that no longer make sense. Chris gives April and Ron management training, while Ann and Ben get in a bidding war over a present for Leslie.

Thursday, April 18th – “Jerry’s Scrapbook” (airing 9:30)
When Leslie finds out Jerry (Jim O’Heir) is retiring, she struggles with the proper way to commemorate the occasion. Chris and Ann prepare to have a baby together, while Tom worries he will become the office punching bag once Jerry leaves.

What do you expect Partridge, Minnesota to look like? Are you surprised that Jerry has decided to retire? Should Chris and Ann be attempting to have a child?