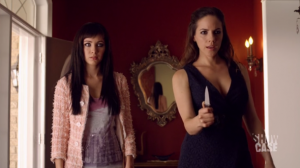 Bo and Kenzi have to go back into private investigator mode when a young girl named Lisa comes to them one night. A babysitter for several homes in the Shady Grove gated community, she had a “dream” where the dad of one of the children she takes care of gets pervy with her on the phone and ends up hung in the foyer. Only, it didn’t feel like a dream, so she wants Bo and Kenzi to look into his disappearance, as he’s supposedly in Mumbai at the moment.

They hit up a real estate agent named Susan for a house tour, where she ends up spilling that the previous owner (Jake Thatcher) had gone missing recently. Just after they all see single dad neighbor Sam peeping in through a living room window before creepily leaving, Susan gets a call from her friend Caroline Parker – the wife of Tim, the man in Lisa’s dreams and the first person Lisa saw after waking up. Bo and Kenzi decide to follow her over to the Parker residence where they hear screaming; Bo bursts into the room, knife in hand, only to find that there’s a gossip-y book club going on featuring Susan, Caroline, and their friend Eleanor.

Following a brief chat that revealed Sam lost his wife and suddenly became more introverted around the neighborhood, Bo decides to talk to Lisa again and tells Kenzi to go around Sam to see if he’d give up any information. Before she goes to Sam, Kenzi stops by the Dal where she finds out that Lisa is a Duppy, a (dead) Fae who lives in the Earth, is summoned every hundred years, and has one central purpose – to act as a killing machine for whoever invokes her. Lisa’s an empty vessel who is charged with the energy of the invoker, anyone wearing a particular amulet, and blacks out immediately afterward. Kenzi talks to Lisa about how special she is for being a Fae and how she could learn to control her ability/urges like Bo did; she then offers to watch high maintenance 10-year-old Ethan (Sam’s son), which turns out to be a reminder that she’s not quite ready for children of her own.

However, once at Sam’s house, she finds a book full of names that she thinks is a hit list and informs Bo about. The succubus uses that knowledge to sniff around Sam at a neighborhood party; she doesn’t decide either way where he’s guilty, but she does learn that his wife isn’t dead. She’s in San Diego with the man she cheated on Sam with and left him for. Later, Bo ends up alone with Susan and Caroline, who want her to join the circle and replace “weak” Eleanor. The trio were a coven of witches who had been exacting vengeance over all those who wronged them, including Tim and Eleanor’s husband Paul for cheating. They, however, deem it to be “eliminating the negative forces” in their respective lives and “taking back the power” that was so rightfully theirs.

To continue to bring about their innermost desires, Susan and Caroline need a third member in their cover, someone who exudes great power and can make Lisa nearly invincible. As they saw Bo using her power to get Sam to talk, they bind themselves to her and use their newfound ability to send Lisa after Sam. However, Kenzi is still at Sam’s home and gets the knife away from Lisa, while Bo proceeds to turn Susan against Caroline and break the bind that tied the three together. Both witches are then killed, turning Bo’s attention to Lisa’s fate. Trick wants the Duppy to be put down, if only for her own sake, and Bo grudgingly complies after hearing how Lisa would rather be at peace than special. All she wanted was to be human and to achieve the goals that she had for herself (travel Europe, kiss a boy, become a doctor), but Bo drains her of her energy and burns the necklace used to summon her. No one will use her as a killing machine again.

Back at home, Bo tells Kenzi that in the temple at the Dawning, she saw something, felt love that was almost paternal in nature. Is her father the reason for her increased power post-Dawning? Can she find him and get the real story behind her past?

Riley and Anita
The Ash has sent a woman named Anita, who is looking for her missing twin sister Riley, to Dyson. It turns out that Riley was one of Bo’s partners earlier this season and ended up dead a short time after being intimate with the succubus; Tamsin immediately pegged Bo as being the culprit, but ultimately, the case was put on the backburner. Now, though, Dyson’s tasked with looking into it again, which he does along with (a still drunk) Tamsin. After pointing out that Riley’s body had six fingerprints on her neck rather than five, the two head to the field where her body was buried, a field that reeked of death and decay. Rather than simply being the place where a random killer dumped a body, the field is actually a mass Fae grave, home to countless bodies, including an Egyptian Fae with six fingers who likely killed Riley. But who (or what) could be hunting the Fae and burying them in the field?

Get a New Job
Isaac is still trying to lure Lauren away from her job with the Ash, as he deems her to be an innovator who isn’t afraid to take risks, not a simple mold farmer from a small company. Although she initially resists his offer, he swings by her place with another thing to sweeten the deal: her mug shot. As “Karen Beattie”. With short, dark hair. He got his highly paid lawyers to look into why Lauren spent five years in the jungles and uncovered that she was an escaped fugitive; the copy he gave her is the only copy in existence, though, and she’s free to do with it what she will.

All that still might not have been enough, had Lauren not had a bad encounter with the Ash. She had gotten everything she needed to do for him done and he still rejected her request for sabbatical, citing a need to protect her from the Dark and his apathy toward her personal life. Hale ends up giving her the weekend away, but that proved to be the thing that motivated Lauren to accept the offer from Isaac. She ends up packing her things and leaving her apartment, including her cell phone and her necklace, to work alongside him.

Additional thoughts and observations:
-“Did you accidentally sacrifice a virgin?”
-“Hey. I thought only stupid girls went in the house.”
-“I’m good at book club.”
-“Way to go, not-Lisa.”
-“You bitches are witches.”
-“You just said the B-word, the A-word, and ginger.”
-Probably my favorite thing about Lost Girl is how tight the friendship between Bo and Kenzi is, particularly when it shows them bonding through “normal” activities. This week? Horror movies, which the cold open uses to transition into the actual case.
-Knowing how (intentionally) campy this show can be, I was a touch disappointed that the gated community was Shady Grove and not Shady Pines, complete with in-dialogue Golden Girls reference. I’ll live, though. For now. (Sidebar: Kenzi is such a Sophia, right? And Bo’s obviously a Blanche. I’ll go with Lauren as Dorothy and all we need is a Rose. Boom, Golden Lost Girls.)
-Interesting that when Lisa kills, she doesn’t leave a body. Everyone just kind of…vanishes.
-The scariest part of the episode was, obviously, Ethan and his extreme hatred of any cheese apart from munster. Personally, I’m a pepper jack man, but I welcome all cheeses equally.
-The thing that has been killing Fae and dumping them into the field apparently lives within a really slim tree. Are the Keebler Elves up to no good?
-Next week on Lost Girl: On the penultimate episode of the season, the Dal is attacked and the Morrigan tries to ignite tensions between the Dark and the Light.