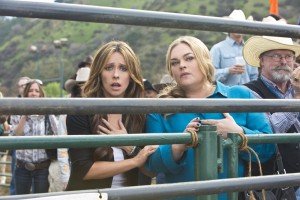 Riley took a huge risk in hiring new people to work at The Rub without Georgia’s input. It’s one thing to manage to day-to-day activities and keep the appointment schedule, but it’s a whole other beast to entrust the security of the business to those you haven’t met and vetted out before. At least Georgia had been in the game long enough to trust her instincts and be able to sniff out an untrustworthy applicant; Riley’s gut has been clouded by an increasingly complicated personal life and financial pressure to keep The Rub open, so is there a chance that either Derek or Nikki will turn out to be poor hires? Could The Rub be in trouble due to Riley’s decision-making?

On tonight’s episode of The Client List, both Derek and Nikki are under the microscope for two very different reasons. Selena, no longer the big dog at The Rub, has had it out for Nikki since Riley hired her and uses the young girl’s checkered past against her when she accuses her of stealing. Having someone younger working alongside her is ultimately bad for Selena’s business, which boomed following the loss of Kendra, Dee Ann, and Jolene, and she’ll do anything necessary to push Nikki out of the picture for good. Of course, Selena is also the only member of the staff to be performing other favors for members on the client list, so unless Nikki begins turning tricks in her room, too, the longest tenured member of The Rub won’t have much to worry about regarding her customer base.

Meanwhile, Derek is said to be holding onto a secret that could bring The Rub down, potentially for good. While there are a number of things that it could be (a law enforcement past/connection, for example), Riley will have to decide if it’s bad enough to warrant a dismissal. Considering the shallow pool of masseurs that she had to choose from, it would have to be something pretty extreme for her to fire Derek, but above all else, Riley has to protect herself and the business that Georgia is trusting her with.

Elsewhere on The Client List, Riley receives an unusual request from a football player client who likes to push boundaries.

Is Selena right in being skeptical of Nikki? Will either Nikki or Derek bring down The Rub? What request could the athlete make that even Riley would be taken aback by?