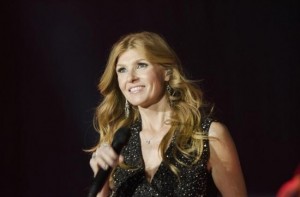 Rayna’s relationship with Teddy was over long before the two agreed to get a divorce. While they tried to keep things going for the sake of Maddie and Daphne, it all became too much to handle and eventually broke them down to where a finalized divorce was the best option. Their lives had been separate for so long and would continue to be separate that even attempting to put on a front wasn’t feasible for the near future. But would Rayna be able to keep their business relegated to the gossip columns and internet forums?

On the next episode of Nashville, Rayna is appearing on Katie Couric’s new talk show to promote her tour with Juliette and speak on the balance it takes to be a successful working mother. With the world (and her family) watching, the topic then turns to her recent divorce from Teddy, which Rayna has deliberately been trying to keep out of the media. Of course, given her standing in the country music industry and her husband’s publicly visible career, there’d be talk about it, but for the sake of her daughters, Rayna’s kept the divorce as quiet as she can. If she speaks against Teddy right now, it could come back to bite her and put a halt to the positive press she’s experienced in recent months, but if she gives a purely diplomatic answer, it might not make for the best TV, nor would it satisfy those eager for a juicy soundbite.

Elsewhere on Nashville, Juliette tries to handle the launch of her album herself to disastrous results, while Maddie lies to Teddy, Deacon gets a crush on his dog’s vet, Avery tries to control his musical destiny, and Gunnar continues having a hard time processing his brother’s death.

Nashville airs Wednesdays at 10:00 on ABC. You can check out spoilers for the next two episodes here.

Should Rayna use her time on Katie to set the record straight about her marriage? How long will Gunnar be down about his brother’s death (and his role in the incident) before moving on? Is Deacon ready for another relationship?