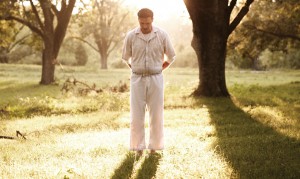 Continuing the trend of cable networks making episodes available early, Sundance has announced that they’ll be making the first three episodes of upcoming scripted drama Rectify available for viewing a week before the official series premiere. Through video-on-demand and TV Everywhere platforms, viewers can sample the first original scripted drama from the network, which is produced by Breaking Bad’s Gran Via Productions and written by Oscar winner Ray McKinnon.

Sarah Barnett, Sundance Channel President, stated, “With this initiative we wanted to create an innovative way to spur interest in the series and expand our audience. By pre-launching the series on VOD, we can give viewers a chance to immerse themselves in the compelling world of Rectify before it ever airs on linear.” She continued, “It has become clear to us that consuming certain shows in this way helps magnify marketing efforts, drive word of mouth and boost sampling which can have an additive effect on the linear premiere.”

Starring Aiden Young, Rectify follows Daniel Holden, a man recently released from prison after serving a 20-year sentence on death row. When he returns to a society that has advanced beyond his capability to understand, he’s a town pariah who is either forgotten or despised by his friends, family, co-workers, and everyone he ever knew. It’s a lonely existence compounded by the fact that he doesn’t know how to live in modern times; jail might have been harsh, but he knew how to survive and, more importantly, thrive within those concrete walls. Now, though, he’s got to learn to live all over again if he wants to keep himself straight and make the most of his time on the outside.

Sundance is the latest network to use the internet to drive word of mouth for a promising drama. Last summer, Starz made the first three episodes of period drama Magic City available to view, which helped it score a second season renewal, while History has released the last three episodes of Vikings prior to their television air date. Networks have also been on the act, with ABC releasing the first two episodes of Don’t Trust the B—- in Apt. 23 early and a multitude of shows having their pilots put online before their official premiere.

The two-hour series premiere of Rectify airs Monday, April 22nd at 9:00 on Sundance.

Will you be watching Rectify? Does the trailer make you more likely to give the show a chance? What do you expect to happen during the first season?