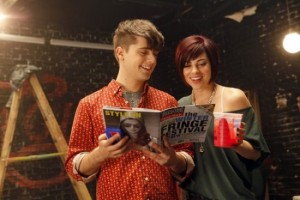 NBC has announced a flurry of scheduling changes that will take place from now through the end of the season. Beginning on March 21st, freshman comedy 1600 Penn will be doubling up episodes, with the extra installments taking the place of planned Parks & Recreation repeats at 8:30. All 13 produced episodes will air, making way for Go On to move from Tuesdays beginning April 4th. The Matthew Perry comedy will air its final two episodes of the season behind The Office, which is a good sign that it’ll return next season. Could the Go On time slot change be a tryout to see how it does on a new night?

Two other comedies will be ending before the beginning of May sweeps. Whitney is set to air its one-hour second season finale on Wednesday, March 27th at 8:00; new episodes of Dateline will take over that time slot beginning the following week. Additionally, the one-hour finale of The New Normal is coming on Tuesday, April 2nd at 9:00 following an all-new episode of The Voice; taking its place is Ready for Love, a reality-dating show produced by Eva Longoria. Originally slated for Sundays, it earned a March 26th “special preview” behind The Voice before moving over to that slot permanently.

Elsewhere on NBC, Smash has been unofficially cancelled, as the musical dramedy will air on Saturdays beginning April 6th at 9:00. Though all 17 episodes will air, the move to a night that broadcast networks have long abandoned is the end of the troubled creation, once thought to be the savior of the network. Meanwhile, Celebrity Apprentice has expanded to two-hours for the remainder of its season after holding steady in its second week ratings.