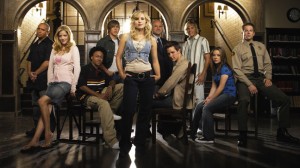 Never underestimate the power of a devoted fan base. Today, in under four hours, the Veronica Mars Movie Project became the fastest growing Kickstarter Campaign in the history of the website, getting over $1 million worth of pledges in under four hours.

A few things come to mind. First of all, why didn’t Warner Brothers have the balls to back the project without the fans getting involved? Did they really think it would fall flat? Has the television industry lost focus of what the viewers really want to such a degree that they giggled a bit when Rob Thomas and Kristen Bell said they’d get the initial backing for the movie if Warner Brothers promised to cover the rest?

If that kind of cash can be pledged in under four hours, just imagine the power our pocketbooks really hold. Someone out there should be fiddling with numbers, theories, methodological madness in light of what was accomplished, because I think it puts the traditional thought process of what sells and how to shame. But, that’s just me. At some point, the studios are going to kickstart themselves out of business, because we’re sick of seeing movies THEY want to make instead of movies WE want to see. Perhaps this will be  little lesson.

For now, critics are going to say it’s unfair the little guys are paying for a movie a big studio should fund, but I’ve just paid a wee bit of money to ensure I get the movie I want, a copy of the script, a T-shirt and a digital copy of the movie. Seems like a better deal than waiting to see what the studio has in store, paying them money, taking a gamble on the enjoyment factor and not getting the goody bag.

The initial amount needed, in a 30 day window, was $2 million. Rob Thomas, series creator and Kickstarter project initiator Tweeted out earlier today that if they didn’t meet the goal of $3 million, Logan Echolls would’t make it through the filming of the movie. The power of social media is amazing. As I was typing this sentence, I watched the funding go from $1.9 million over the $2 million mark. Done deal. At the rate the backing is rolling in, we’re looking at a trilogy.

I don’t know how long this campaign has been in the works, but if you’ve seen Kristen Bell lately, she’s enormously and gorgeously pregnant with her first child with beau Dax Shepard. In this fun Kickstarter video, not so much. Just watching the plug brought a tear to my eye. Enjoy!

If you want to be a part of the fun, visit The Veronica Mars Movie Project page and join in. That’s all it takes, apparently, to get a movie made these days. Now let’s start thinking about what other series we can Kickstart back into development….