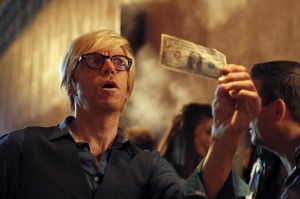 Ever since they arrived on this planet, Larry and Jackie have been trying to learn about what’s important to human beings and how best to assimilate into the world they adopted as their own. Whether it be through fashion choices, holiday celebrations, or parenting techniques, the couple have been taught by Debbie and Marty about human society and what constitutes as normal behavior in modern day. However, as much as the Weavers have taught them, Larry and Jackie have begun to learn on their own and attempt to figure out the suburbs on their own. Can’t be too harmful…right?

On the next episode of The Neighbors, Larry Bird has decided that he wants to win an Academy Award after watching the ceremony with the Weavers. When he came to this planet, one of his goals was to win a Nobel Prize, but since the general public reveres filmmakers and actors more than people who bring peace and knowledge into the world, he changed his mind. Larry struggles for an idea until he finds out that Max and Dick are in the finals of their school’s spelling bee, meaning that he’ll be attempting to create a documentary a’la Spellbound.

Elsewhere, Marty isn’t trying to become an award-winning filmmaker; he’s at the finals to help encourage Max to continue to do well in school after coasting for a while.  It’s a delicate balance for Marty, the child of two people who pushed him too hard academically. He wants Max to do well and become all that he could be, but he doesn’t want to leave the emotional scars that his parents left on him. Will Max become more motivated after seeing that his parents do care about him and his accomplishments?

Do you think that Larry has a point about the people that the American public pay attention to? What will be the result of the footage he and Marty film? Will Dick or Max win the spelling bee?