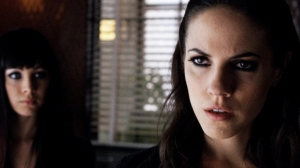 Bo and Lauren are at the Dal and trying to pick out someone for Bo to feed upon. Lauren rejects her suggestions of an attractive male hydra (with 9 heads down there) and a female fae who had recently taken a 1000 year vow of chastity before agreeing to a pretty blonde in a navy blue outfit. The doctor was looking forward to a little time for her body to rest and heal from the copious amounts of copulation it had been undergoing and she does get it, although she has to listen to Bo and her fling upstairs while she works. Lauren is trying to concoct new injections to control Bo’s hunger, but before she can come up with anything conclusive, Kenzi interrupts the feeding to tell Bo about what could be their next case.

There are humans liquefying and after hearing from a woman with a firsthand account of her husband Graham disappearing into a pile of goo before her very eyes, she wants to get together with Bo to tackle the problem. The woman had told her that authorities had come to her home, cleaned up the remains of her loved one, and took his belongings (a suitcase, his phone) before explaining that it would be a part of their “investigation.” It reeks of fae involvement, only Bo doesn’t immediately spring into action. She goes back to her feeding/lovemaking and sends Kenzi and Lauren to gather information on the case before joining them midway through. Kenzi tells the woman that they’re from the show Paranormal Hot-vestigators, but Graham’s mistress Delia shows up before she can get much in the way of testimony, minus talk of their lack of a sex life.

After pulling the two apart, Bo hears from Delia that Graham took her to sex club Liberalia the night before he died, which makes sense considering the amount of fae secretion in his body post-mortem. At the club, decorated with a distinct Middle Eastern influence and featuring bellydancers, Bo and the gang come into contact with Roman, the Bacchus who gorges on debauchery and offers fae ecstasy in all its forms. However, Bo’s charms don’t work on him and she leaves without having any information on a fae that had been feeding on humans the night before.

She does figure out that there’s a secret “VIP” section, accompanied by a bouncer, that can only be accessed by a key…a key that Trick happened to have a copy of, from his wilder times in the 1870s. Back then, the club was much tamer; while he initially wants to go with the group, he decides against it. Bo returns to the club the following night with Dyson, Tamsin, and Kenzi, the last of which had informed Lauren of Dyson’s imminent appearance at the club. Lauren arrives decked to the nines and carrying the antidote that she had come up with and that could save the humans at the club and keep the strain from mutating.

Bo, Kenzi, and Lauren get into the VIP section of the club, which has an Eyes Wide Shut-like group of masked/robed people waiting in line to go into yet another exclusive section that promises sexual ecstasy. Inside is a manta, a hermaphroditic underfae with tentacles that can only survive in subtropical conditions. Bo blows her cover and attempts to get the humans who had contact with the manta to get a shot; it was then that the security team rushed in and got a hold on Lauren, only for Bo to channel the dark within her to defeat them. It’s different than any other time that Bo has unleashed on her opponents – much more savage, aggressive. Bo always had enough good in her to balance out the moments of darkness, but here, Lauren had to talk to her about the first time they met to snap her out of it.

While the other three were busy fighting, Dyson and Tamsin head to Roman’s office, where he attempts to ward them off and keep them away from the holding tank that houses people who had liquefied. Roman confesses to becoming numb to all the sexual kinks he had attempted in his lifetime and thus, needed to try something different to continue giving his life a sense of purpose; that something different was manta mating, where the creature would transfer the pleasure it received from mating with humans into his body. Without pleasure, Roman feels like his life has no point. When he tries to use a wand to injure Dyson, the wolf grabs a decorative bowl and reflects the blast back to Roman, killing him.

With the steam room down, the humans okay, and the manta dead, all should be well, right? It seems like it will – Lauren and Bo have a conversation about feeding and the former confirms her discomfort with “picking out” a meal, while the two agree to go out to a (regular) dinner that evening. Once Bo left, Lauren calls someone and tells them that there’s something wrong with Bo.

Elsewhere, Bo heads home to find that Kenzi had bought Thai food and wanted her to stay to dine on some spicy noodles. Bo gets her best friend to take a bite of the food, which she does and enjoys despite her peanut allergy, only to slam her up against the wall, demanding to know where the real Kenzi was.

Oh, and there’s the whole matter of Bo’s pretty fling turning up dead a block from Bo’s house…with strangulation marks…

Additional thoughts and observations:
-“Ever switch a liver with a liver?”
-“Holy Octopussy!”
-“I’m fine. Little bored, but…”
-With all of her scheming and troublemaking, Kenzi was very Loki from A Midsummer Night’s Dream in this episode, no? What type of fae do you think has a hold on her?
-I’d watch the shit out of Paranormal Hot-vestigators. I mean, I’m just saying.
-The hooded people in VIP also made me think of the Illuminati. The Fae-minati?
-Next week on Lost Girl: Bo’s friends stage an intervention.