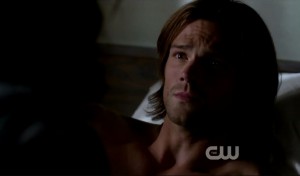 While watching Supernatural Season 7, I was so concerned about Sam and Dean’s relationship and whether it would ever fully mend. I never dreamed that Season 8 would have them farther apart than ever. Physically and emotionally, the Winchester brothers cannot seem to get their crap together.

I completely get why Sam is regretting the loss of Amelia. Even though they didn’t spend a lot of time together, their connection was very deep. In a way, he blames Dean’s return for his split with Amelia. Even if Amelia’s man had come home, if Dean hadn’t Sam might have stayed around and fought for the woman he loved. Instead he picked back up with the life he hated when the series started.

Sam was still pissed Dean pulled the “Amelia’s in trouble” trick to get him to figure things out, and on top of that there’s the Benny intrusion into their lives. Dean trusts Benny and wants Sam to trust his faith in Benny. Sam laid it out for Dean pretty simply – Benny or me.

Considering everything Sam went through in the past with his demon blood – being a demon, sucking on demons, loving demons, killing  and enjoying it – you’d think he’d have a bit more understanding of where Dean was coming from having come out of purgatory. Sometimes you just need to have someone there to who’s a part of it, but isn’t so intimately involved, to just listen and support you. Once Benny called Dean while he was clearly eyeing some youngsters for their warm blood, I realized Sam and Benny are like each other’s sponsors in Purgatory Anonymous. They went through something so heavy and intimate together and they created their own deep bond. Much like the one Sam was creating with Amelia.

Thankfully, no matter how far apart the brothers are, with each passing season they become sexier and better looking. Focus on the positive!

Castiel found a way to bring Sam and Dean together when he tried to safe Samandriel (Alphie). Sam left Amelia with the notion that if they both showed up at their motel room the next day, they would be together forever. But if either of them didn’t, then they could never go back. Dean told Benny he would be there to help him as soon their case was over. Then everything went wrong.

I’ve known there was something wrong with Naomi since we met her. Since Castiel has been back, he hasn’t seen Heaven, only the office of Naomi, which I assume is all she wants him to see. I still don’t know whether or not she is even in Heaven. When she told Cas to go and save Samandriel, I thought, okay, she’s a good guy. Then he was compromised by Crowley’s horrific torture methods and it was discovered Hell isn’t the only place with a sacred tablet. As Samandriel was telling the secret to Crowley, Castiel was reliving some sort of torture Naomi did to him and he was flying back and forth between earth and her office.

Once Samandriel was freed, Naomi demanded Castiel kill him. She was like an abusive partner, talking Castiel out of what Samandriel tried to tell him about Naomi, that something wasn’t right, that she was using the angels for something. When Cas was talking to Samandriel, he didn’t even know who Naomi was. The whole thing is just very freaky and Naomi cannot possibly be a benevolent angel trying to save Heaven the wrath of Crowley and his minions by offing other angels with mind-controls brothers.

The only good thing that came of the horrid situation was Sam and Dean found a reason to stick together. When Cas is in trouble, they can’t go their separate ways and leave it up to fate. Putting everything else aside, Sam and Dean decided they would continue on with their work and save happiness for another day. Dean said goodbye to Benny (and we lost Ty Olsson!) and Sam didn’t show up to the motel, leaving Amelia heartbroken once again.

There was a resignation as the Winchester brothers sat down on the couch, popped open a couple of beers and watched TV. They may never get their happy ending, but they’ll continue to fight so that others do. While the world will continue to be in love with Sam and Dean and Supernatural, we will also hope they fall in love with each other again, as brothers and friends. As they try to save the world, it would be nice if they could at least have each other to lean upon.