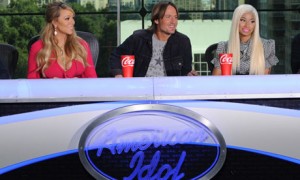 After a lot of speculation, anticipation, and hype over the supposed “diva-off” that was going to occur during this season of American Idol between Mariah Carey and Nicki Minaj, last night viewers got to see the action for themselves, which proved to be pretty much a whole lot of nothing. Sure, the ladies aren’t going to be running out to get BFF tattoos anytime soon, but so far, at least, the comments seem to be nothing more than a few digs and pokes more for the sake of creating something to say rather than to actually get anyone’s goat. Time will tell, however, if it heats up into the brawl that it has been touted to be.

Usually it takes a few episodes of auditions for me to get burned out on the preliminary process, but last night, I was bored about an hour in to the two hour premiere. I’m not sure if it was the uninspiring talent or the lack of any real chemistry between the judges, but either way, I had to take a break part way through.

Mariah, who at times seemed surprisingly maternal and at other times unsurprisingly diva-ish, offered her opinion without much incident. Keith Urban, who is by far the most likable judge this season, seemed genuine and tried his best to get a word in edgewise sitting between Nicki and Mariah. Randy, as usual, tried to assume the role of tough judge, only to come off as a bit contrived, but at least that was reminiscent of seasons past. Nicki seemed to be under the impression she was running the auditions, declaring when singers could try a second song and often jumping in to begin the critiques. All in all, rather than a panel of judges working together to find the American Idol, it seemed there were four individuals giving their opinions and working towards their own goals.

The talent on the premiere of American Idol wasn’t too much to get excited about either last night. Sarah Restuccio might have been one of the most entertaining of the night, a sweet country girl who auditioned with a Carrie Underwood tune but then broke into an awesome rendition of Nicki Minaj’s “Super Bass” when asked to sing a second song. Frankie Ford, bless his heart, came into the audition very nervous and had to start over after faltering with his initial notes. After gaining his composure, however, he gave a great audition of “Sweet Dreams” that earned him a golden ticket to Hollywood.

Although my first impression of season 12 of American Idol wasn’t the best, I am going to hang in there and hope that the judges’ panel will find their groove and that the best is yet to come with the talent. Tonight, the show heads to Chicago in search of the next big thing and with any luck; they will find it in the Windy City.

What did you think of last night’s American Idol season 12 premiere? Share your thoughts below!