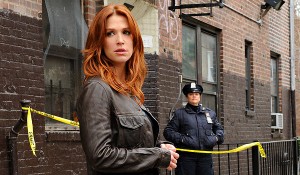 CBS has announced premiere dates for four upcoming summer shows, including the resurrection of a once-canceled crime drama, the debut of a novel adaptation, and yet another season for a reality stalwart.

On Wednesday, May 29th at 8:00, the network will launch a baking series for amateur bakers, which is based on The Great British Bake Off. The reality-competition has yet to be titled. Monday, June 24th sees the debut of Under the Dome, a 13-episode adaptation of the Stephen King novel of the same name which tells the story of a small Maine town sealed off from the world by a transparent dome.

Reality giant Big Brother debuts its next season on Wednesday, June 26th at 9:00, expanding its reach to Sundays (June 30th, 9:00) and Tuesdays (July 2nd, 9:00) along the way. The show will then move forward to Wednesdays at 8:00 beginning on July 17th. Finally, Unforgettable, starring Poppy Montgomery, will have a second season after all, which premieres Sunday, July 26th at 9:00. The show was cancelled at the end of the 2011-12 season following disappointing ratings, but it managed a renewal through cost-cutting measures.

Do you think CBS is the right network to adapt Under the Dome? If not, who would have done a better job? Will you be watching Big Brother this summer or have you had your fill of the drama? Should Unforgettable be given a second chance?