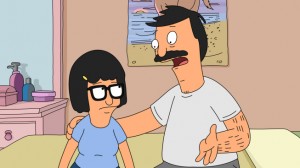 When you have a family, routine suddenly becomes all the more important. With all the chaos, hormones, and pressure that children and teenagers bring into the world, to be able to control the parts of life that you’re able to control is necessary for sanity. The ability to know how a good portion of the day will happen and the litany of faces you’ll see may not seem important when you’re younger, but it increases in importance with age and experience.

On the next episode of Bob’s Burgers, that routine gets disrupted when Hugo, Bob’s regular health inspector, quits his job after discovering the nude beach in town. There should be a little relief in that decision, as Hugo had just given Bob a bad grade for something arbitrary, but Hugo’s replacement (guest voice Fred Armisen) is even worse. He blackmails the Belchers into letting him play his (awful) music in the middle of their restaurant; if they kick him out, they’ll get a bad grade and a bad reputation, which will keep the customers he drove out with the music away for good.

To restore order to his life, Bob decides to head to the nude beach and convince Hugo to come back. While all this is going on, the kids are selling looks at the nude beach, allowing their peers to peer through a telescope at the people getting a tan. However, it’s not all hard bodies and eye candy, as most of the occupants of the beach are older, saggy, and have liver spots. Still, Louise manages to quieten the increasingly hostile crowd down, but what would happen if they saw someone they knew and didn’t want to see in a position like that?

Will Bob be able to get Hugo to come back into the world of health inspection? How will the Belcher family get rid of Tommy and evade his blackmail? Is there any way the telescope Tina, Gene, and Louise are using to sell looks at the nude beach doesn’t get confiscated by Bob and Linda?