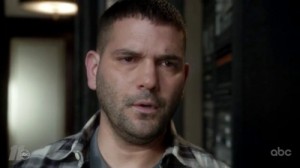 Olivia Pope was pretty much beside herself when Fitz was gunned down at his birthday party. The two might have been on the outs as a couple, but it’s been made clear that they each have very strong feelings for the other and their departure was more circumstantial than it was personal. The normally unflappable Pope spent much of last week’s episode of Scandal alternating between breaking down and pulling herself together to resume her duties at the White House as her former lover laid in a hospital bed in critical condition, oblivious to the chaos going on around him.

Chaos inflicted by Huck, Olivia’s associate revealed to have pulled the trigger and killed the Press Secretary while wounding two others. He’s the man who the feds are currently combing D.C. for, the most wanted man in America whose physical description and rough profile sketch will be plastered all over. And he’s not told anyone – until now. One morning, while acting President Sally Langston updates the nation on Fitz’s condition, Huck wakes Harrison and confesses to being the gunman. Harrison now has a choice to make  – he can immediately spill the beans to the rest of the team (and Olivia), which will threaten to expose Huck and take him away from the team for good, or he can keep the information close to the vest and work the situation himself. Harrison proved himself capable of leading earlier in the season and that newfound sense of confidence in his abilities could come in handy here.

Elsewhere on Scandal, Cyrus finds out the truth about what James has been investigating, which will likely lead to the ultimate decision for the reporter. What’s more important to him – his relationship with Cyrus or his rejuvenated career? If it’s the former, the information about the rigged voting machines will have to stay buried for good and America will never know that there wasn’t supposed to be a President Fitzgerald Grant, but if it’s the latter, he’ll be wrecking the career of the man he loved in order to raise himself up.

The winter finale of Scandal airs Thursday at 10:00 on ABC.

How do you think Harrison will react to finding out that Huck’s the gunman being hunted down by the feds? Should he tell Olivia and risk losing Huck as a team member and a friend? With Olivia working in the White House with Sally, will she be able to focus on something aside from the shooting?