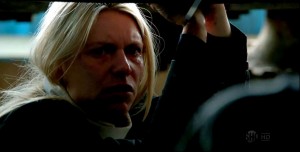 I am one of the biggest suckers for the old broadside the car trick on television and in movies. Somehow, they get me every time. At least I was aware enough during Homeland to know that Carrie was in the process of being captured by Abu Nazir. Not an enviable place to be at all.

On my phone, I have to have the Skype application open in order to receive incoming calls. Because it eats memory, I only open it when I am going to use the application. Brody must use Skype a LOT. Or, not so much SINCE HE’S A TRIPLE AGENT SPY. Abu Nazir calling him in the middle of their hotel room was ridiculous. Just popping up on his screen and talking as if Brody was taking any normal phone call. That was the most unrealistic thing I’ve seen on Homeland. I just didn’t buy it.

The conversation between Carrie and Nazir when he said the emotional transference he felt when breaking Brody was a kind of love was unique. It was also frightening as hell. Listening to a madman saying they will use whatever means possible, even taunting children with carts filled with candy and toys to kill and terrorize for their mission is so cold, and yet so real. Carrie was betting on Brody turning his back on her, even though she wanted to be saved, to prove a point; that he wasn’t as easily moved by the calculated mind frakking of Abu Nazir. She did it through tears, while Nazir calmly laid out the plans of future generations to wipe western civilization to extinction. Heady stuff. 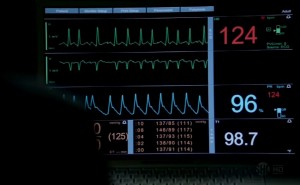 I was unfamiliar with the machine Nazir wanted Brody to find, but in a way I was proud of Nazir. When his plans to utilize the van bomb went awry, he chose a kinder, gentler method to get back at Vice President Walden for the death of Issa – he’d go straight to the heart of the matter. Through the defibrillator implanted in his chest. It accomplished two things. One, it allowed Brody to carry out his mission for Nazir in avenging Issa’s death without collateral damage. Only the man in charge took the hit. Two, it gave Brody an opportunity to stick around and get his own form of vengeance, not only for Issa but for what Walden’s family put Dana through by paying off the daughter of the woman killed in car accident.

Nazir won the argument with Carrie, Brody saved her life and took that of Vice President Walden. But there was a gentle struggle going in within Brody. Even after promising on the everlasting soul of Issa, there was hesitation to give Nazir the number he needed to deal with Walden. I’m not sure if the exact catalyst that thrust him in the direction he chose, but it did show there is hope for Brody’s humanity.

We were forced to suffer through another scene with Dana and Finn, but my guess is he’s a plant of convenience to bring more emotion to Brody’s life at home when the news of Walden’s death hits. Finn may still be there when Brody gets home, so it’s a possibility the scene of him losing his father could play out before Brody’s eyes. That would be a nice approach to take, just to reinforce that for every life you take, there is someone innocent left behind. No matter how awful the person may seem to you, somebody else loves them.

Quinn, some other dude I don’t remember and Saul were heading off to Highway 50 to get Carrie – who of course disobeyed orders and went back to the warehouse to keep an eye on Nazir – but he seemed to be gone. Saul was pulled away and asked to go upstairs, and then downstairs, leading viewers to think something underhanded was afloat. Once I saw Quinn pull the gun on Brody, I don’t feel confident that Estes won’t try to pull the trigger on anyone. Talking it over with a friend, however, brought up the possibility that word has reached them Walden was dead and Brody as with him when he died. That would definitely shake things up a bit around there.

If you stuck around after the episode, there was a “showrunners discussion.” They brought up some interesting points to ponder. Brody’s agreement with the government has been fulfilled, so the only thing he has to do now is go home and disengage from his family. Does that mean we could be in for a full on relationship between Carrie and Brody? A happy Jessica and Mike? There was also mention of Carrie going back to the warehouse not to confront Nazir, but to keep eyes on him, although she was too late. The preview clips show her discussing a leak. If someone on the task force is leaking information, I think we can count out Quinn and Estes, as they have their hands full with other pursuits.

Two episodes left and I can’t stand the wait. What are your thoughts on what’s next?