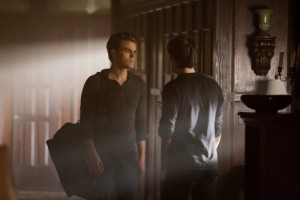 If you read my review yesterday, you know how I feel about this whole sire bond issue between Damon and Elena on Vampire Diaries. I knew Damon would feel the same, and the scene below proves it.

Can anyone blame him for thinking Stefan is grasping at straws to prove Elena has gone batty rather than just fallen for Damon? Stefan sure has his head shoved up his own arse, doesn’t he? As well as the rest of Mystic Falls. It truly amazes me that not one person in that town can bring themselves to see any of the good Damon has done over the years, by temporarily removing their blinders, if even more a minute.

It was Stefan who went totally off the rails only a year ago, kicking around with Klaus on a wild killing spree, but nobody even remembers that any longer. He’s saintly, Damon is a demon. Aptly named, as well. There is a part of Damon that allows himself to question whether Stefan is right, and Damon has somehow manipulated the situation without any intention. That has to hurt.

If things go down such that it turns out Damon has had an impact on Elena’s decisions by becoming the inspiring the sire bond in vampire history, then I hope like hell everything else that has happened between them and between Stefan and Elena causes her to pause before running back to Stefan and truly examine the situation she’s in. She has had doubts, she has been torn between the brothers, even as a human.

No matter what the result of the potential sire bond, let’s see the adult Elena has become rule the teenage heart.