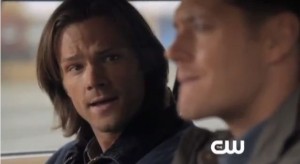 In this new Supernatural clip released by The CW, it looks like any doubt we had about the tension between Sam and Dean can be eased now. No doubting needed, they’re still genuinely miffed at one another.

The last thing Dean needed to hear from Sam was that Same had been having Benny followed for the last week, by a recently released mental patient. Sure, the patient was someone they knew through work with their father, John, and met themselves in episode 5.11,” Sam, Interrupted” while he was still in the loony bin, but that’s not the best reference for some dude following your friend around now, is it?

I have to give kudos to Dean. In the scene we’ll watch below, he’s on board with checking up on Benny if he really is the cause of a vampire killing. If he was just in love with Benny without using good judgment, as well, then I’d be worried. As Dean puts it, “If Benny’s in Louisiana draining folks, we should look into it.”

The bigger issue with this scene is the Winchester Brothers are still not communicating. If someone like Martin Creaser calls asking to get back into the hunting game, then that information should be shared don’t you think? Especially if the case he put him on involved Dean’s new best friend. Tsk tsk tsk, Sam. Keeping secrets is not a brotherly thing to do.

I’m hoping for big things with “Citizen Fang” because it’s the mid-season finale. That’s right, we’ll need to enjoy it because our sexy Winchester bros won’t be back until 2013. With the addition of Benny to the episode, I’m  hoping for a great send off into the new year.