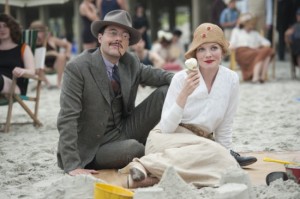 Gyp Rosetti has been the wildcard this season on Boardwalk Empire. The towering Italian may have the firepower, aggression, and ambition in order to seriously challenge Nucky for the role as King of Atlantic City, but he’s often undone by his own arrogance and penchant to overdo it on the violence. He’s the type of player in the game of Prohibition that you want on your side, as long as he keeps within a certain distance from you and you have him on a tight leash. Let him off the leash, though, and he could cause problems for everyone in town.

Tonight on Boardwalk Empire, Rosetti, growing in confidence/delusion by the day, will be spreading his toxicity all over the city. In a bid to position himself better against Nucky, he’ll be taking over the house that Gillian uses to run her business, much to her chagrin. Gillian got herself involved in this mess out of some misplaced need for vengeance against Nucky due to Jimmy’s death, but if you decide to play with the biggest and baddest monsters on the boardwalk, this is the type of situation you’ll have to deal with.

Rosetti then bars Richard from going to the house, likely due to his (former) allegiance to Nucky, and goes around a suddenly ambitious Chalky White, who might not be that up for company after his plans to open a club were shut down. Gyp having the backing of Joe Masseria has given him a boost of confidence and in resources to unseat Nucky, but will he be able to control that confidence and turn it into results? Or will he find himself the victim of a smarter attack that goes after his (rather broad) weaknesses?

Will Nucky be able to hold off an impending attack from Gyp? What happens when the role Luciano and Meyer are playing in the war is uncovered? How will Harrow react to the house being overran by Rosetti’s men?