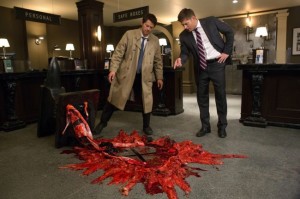 Season 8 episode 8 – that must mean something, right? Who in the hell would have guessed eight years ago that a little show called Supernatural, about two extremely hot brothers named Sam and Dean Winchester fighting demons, alternating trips into and out of hell and purgatory would still be fighting the good fight into 2013? If you’re shaking your head yes, I don’t believe you.

Demons, angels, Lucifer, Death himself; the Brothers Winchester have been playing with big boys for quite some time now. Their best bud and angel, Castiel, was rescued from purgatory in the last episode, “”A Little Slice of Kevin.” We were treated to Cas’ full on spread of wings and a secret – according to fellow angel Naomi, someone in heaven wants eyes on Sam and Dean, and Cas is to make regular reports back as to their welfare.

Given their many brushes with life and death and the attention paid to them by forces of good and evil alike, its always been obvious they were more than your average hunters. I’m more intrigued than ever to find out what their special place is in this formidable fight between heaven and hell.

The best news? Castiel is on board to to become a hunter in “Hunteri Heroici,” and he seems to be back to his good time guy persona. Both on screen and in real life, Misha Collins is a pure delight. Check out the lines between he and Dean in the clip.

Cas: I was being bad cop.
Dean: You were being bad everything.

Who’s excited?! After the darker elements (even laced with humor as Supernatural always is), this looks like a fantastic return to slapstick type humor they do so well. Enjoy the clip and we’ll see you back here afterward for a review of the episode!