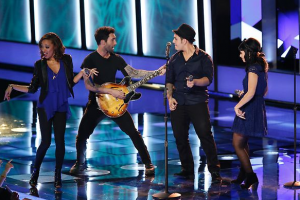 Last night on The Voice, two more contenders were sent home leaving the remaining contestant count at a mere eight. Leaving the show last night were Sylvia Yacoub from Team Christina and Bryan Keith from Team Adam, both of whom had reasonably good, but not great performances the night before.

On Monday night, Sylvia took on Alicia Keys’ “Girl on Fire” and, while she certainly showed that she possessed a great deal of talent, it just seemed like she was in a bit of a rut which may have left viewers, myself included, bored with more of the same. Bryan Keith ambitiously took on the Piano Man himself with “New York State of Mind” and managed to pull off a performance that was impressive in the chorus, but somewhat robotic during the verses. All these things being said, I don’t believe these two were the worst of the night, necessarily, so their eliminations were, indeed, a bit of a surprise.

While there was certainly a good amount of tension in the air on last night’s live results show, the singers and coaches still managed to pull off an entertaining round of performances that kept the mood seemingly light. Christina, still trying hard to plug her new album, performed a song from it called “Let There Be Love” and was joined by her team as well. Her team also joined forces with Team Blake for a performance of Pat Benatar’s “Hit Me with Your Best Shot,” a choice selected by fans via Twitter. Rascal Flatts even joined in on the fun singing Queen’s “A Crazy Little Thing Called Love” with Adam Levine and Team Blake.

The top 8 contestants will perform live next Monday, hoping to win the approval and votes of the viewers so they can stay in the competition to become the next winner of The Voice.