After months of anticipation and commitment to two nights a week, viewers were finally rewarded last night with a winner for season 3 of The Voice. While all three contestants, Terry McDermott, Nicholas David, and Cassadee Pope were talented  and had, undeniably earned their places in the finale, it was Cassadee who nabbed the title during last night’s results show.

Whether you were Team Cassadee or not, you most likely did not walk away with a total let down, as so often happens with these shows in which the contestant you were rooting for doesn’t take the win, because all three singers shined last night in with finale performances that will not soon be forgotten. Terry, who has been consistent all season long, did not disappoint with an “awesome” (declared so by host Carson Daly) duet with Peter Frampton in which they sang “Baby, I Love Your Way.” Nicholas had what might have been the most entertaining performance of the night for me, a duet of “Cruisin” with Smokey Robinson. Cassadee was given the opportunity to sing with fellow pop / rocker Avril Lavigne whose songs she’d covered twice on the show.

In the end, all three of these singers have the potential to go far in the music business, a fact that guest Kelly Clarkson pointed out to them last night. While Cassadee may have gotten the win (congratulations to her), I have a feeling we won’t be seeing the last of any of these contestants.

For those who are fearing withdrawal, not to worry because The Voice will be returning in a few short months with Shakira and Usher taking Christina Aguilera and Cee Lo Green’s places for this season in the coaches chairs (don’t worry, they will be back in the fall). 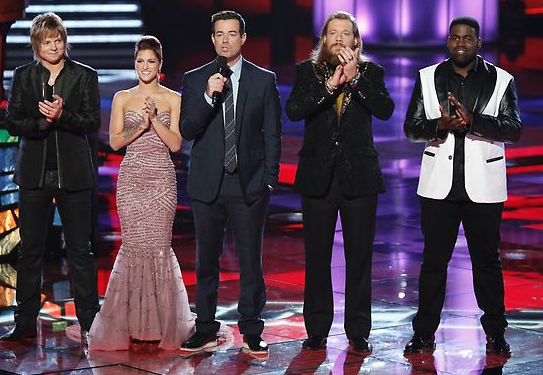