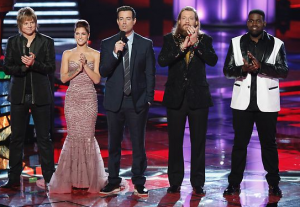 There was a different feeling in the air last night on The Voice with only an hour long show that had the remaining four contestants delivering heartfelt performances that felt like they were singing for their supper, or rather survival in this case. Even Blake Shelton’s performance of White Christmas was extra sentimental, with all sixteen of his team members returning to sing backup.  While no amount of sentimentality could crack Carson Daly, even he managed a little extra encouragement to the singers after completing their songs.

Team Cee Lo kicked off the night with Trevin Hunte first up on stage. After an emotional visit home to visit his family (all the contestants got to head home this week), it seems that it may have been a bit too much for him because his performance of “Wind Beneath my Wings,” while good, was not his best, with him even falling slightly off key more than once throughout the song. The coaches, who weren’t looking to bash anyone last night, praised him for his performance, but weren’t offering up any standing ovations for this one.

Next up representing Team Cee Lo was Nicholas David, who ditched his glasses and fluffed his hair for last night’s performance of “You are so Beautiful to Me.” Blatantly emotional and apparently weak in the knees (why did he sit in that chair during the coaches’ comments?), Nicholas earned high praise for his touching performance and song choice, although Cee Lo indicated that there was some conflict with the selection during the week, but left who was against the choice a mystery.

First up for Team Blake last night was Cassadee Pope, who opted for another country selection despite her pop roots with Keith Urban’s “Stupid Boy.” Whether or not you believe Blake’s excuse for choosing so many country songs for Cassadee (it’s because she can connect so well with the country lyric), there is no denying that she can deliver on these songs like nobody’s business. With impressive vocals and an emotional delivery, Ms. Pope knocked it out of the park with this one.

Finishing off the night was everybody’s favorite Scottish rocker, Terry McDermott who took on (gasp!) “Let it Be” for his semifinal performance, a risky decision that certainly paid off.  With a clear tone that was reminiscent to Paul McCartney’s he delivered an excellent rendition of the class song that stayed true to the original, but offered a few interesting notes towards the end.

Tonight, four will become three as one contestant will be sent home after getting so close to the finale.  The remaining contestants will then head to next week’s finals in which one of them will be crowned the next winner of The Voice.  As for who is going home tonight, I believe poor Trevin might be in trouble.