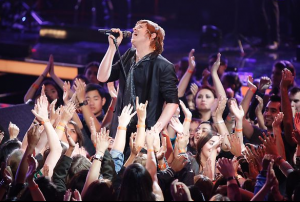 Last night on The Voice, the top 12 performed and while some impressed, there were definitely a few misses as well.

Over on Team Adam, Amanda Brown, who has yet to disappoint, did so big time with a somewhat boring and certainly unexciting performance of Florence and the Machine’s “Spectrum.” The tearfully unsure look on her face while the judges delivered their comments said it all as to whether Amanda Brown felt confident about staying in the competition for next week. Delivering better than usual performances were Melanie Martinez and Bryan Keith, although Bryan outshined both of his team mates by a long shot with his version of Amy Winehouse’s “Back to Black.” Melanie, while vocally on point, seemed a bit contrived when the tears and emotion she seemed to have in her song, instantaneously disappeared when it came time for judges’ comments.

Team Blake, which blatantly seems like the most fun team to be on, had a good night with strong, if not perfect performances by Cassadee Pope and Michaela Paige. Terry McDermott, rocking his newly trimmed Spinal Tap hair, blew everyone away with his rendition of “More Than a Feeling,” leaving Adam speechless and Blake somewhat emotional. I don’t care what anyone says about versatility, I love that Scottish rocker.

Also delivering strong performances last night on The Voice was Team Cee Lo with Cody Belew’s gutsy delivery of Tina Turner’s “The Best” and Nicholas David’s soulful take on Huey Lewis’s “Power of Love.” While I don’t think the song choice did Nicholas justice (and I love that song), I do think he managed to do a good enough job to stick around until next week. Fan favorite, Trevin Hunte, didn’t disappoint as well, delivering a powerful rendition of “When a Man Loves a Woman” that left several of the judges on their feet.

Team Christina came out strong last night with an impressive performance by Adriana Louise, who took on Carrie Underwood’s “Good Girl.” Unfortunately for Adriana, however, she didn’t peak the viewers’ interest last week when Christina saved her and so she might find it hard to capture their attention this week as well.  Dez Duron continued to make little girls swoon with his version of Can’t Take My Eyes Off of You,” and if that weren’t enough to ensure he get those lady votes, he made sure to stare meaningfully in the camera and even raise one eyebrow to seal the deal. Sylvia Yacoub, who after last week had cemented her place as a front runner, faltered a bit with an attempt at Celine Dion’s “My Heart Will Go On,” but to be fair, few singers would fare well on that song.

Tonight on The Voice, we find out which two contestants will be sent home and which ones will go on to sing another day.  With America now solely in charge of choosing who moves on in the competition, it will be interesting to see how it plays out. My prediction:  Say goodbye to Melanie and Adriana.

The Voice airs tonight at 8/7c on NBC.