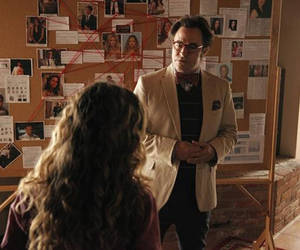 Revenge can sure pack a lot into one episode, can’t it? My only complaint were the ridiculous Neimen Marcus/Target commercials that attempted to insert themselves into the storyline. They were confusing and utterly annoying. Otherwise. Wow.

Emily and Amanda were lovers in juvie! How he could come so close and be a world away was actually very funny. I knew Mason Treadwell wasn’t long for this world, but I never imagined he would go down like he did, knowing fully well that Emily was Amanda Clarke and having every bit of knowledge he ever wanted, but no way to use it. Instead, he will spend his days and nights in prison, awaiting the whims of Emily Thorne, or Amanda Clarke.

Brilliantly done with great assists from Nolan and Aidan. Even Kara, who everyone was willing to write off as off her rocker played her part quite well. She had no intention of hurting Victoria or Conrad, but she did get the truth about Gordon out of them, and in the process they turned to each other for solace as they thought they were facing their last moments on earth.

The fake Amanda still comes dangerously close every week to doing something stupid to ruin both her and Emily’s life. While I get where she was coming from as she confronted Treadwell, what was she going to do with his body if Emily hadn’t shown up? How would she have cleaned the blood in the house? There are only so many things you can do on your own, even when you’ve been working with the best. One thing is certain, she has many more tricks to learn from Emily.

I feel a little stupid for not understanding exactly what the purpose of “The Initiative” is, why they have been around for decades and why they are so interested in the Graysons and ruining them. Why has it taken so long? They don’t seem to have that much initiative, if they’ve been playing at the same game this long and the very people they seem bound to destroy are still up and running. I did find it amusing the newlyweds naturally assumed it was The Initiative behind Kara’s quasi hit on them. Emily’s ability to move silently in the background and pull strings is amazing. I’d like to have the phone number of Satoshi Takeda. I think I’ve been going about this thing called life all wrong.

Do you think we’ll see Kara again? It didn’t take long for Amanda to pop back up, and I would find it difficult to believe Emily would let her mother go forever. Something is bound to bring her back, especially since Jennifer Jason Leigh managed to bring so many layers to what otherwise could have been a very one-dimensional, nutty, poor mother. No matter what you expected when she came in, she went out with at least a hint of empathy. Her life was hell, and until we live it, it’s hard to judge what we might do in her shoes.

That’s what’s so fun about Revenge. Unless they make a character the ultra nasty, and so far only Helen is giving me that impression because we know so little about her, even while you’re busy rooting against their survival, a part of you still wants their fingers to be clutching the ledge in a desperate attempt to stay alive. Multi-faceted  with equal layers of good and evil make the most interesting characters on television and keep us tuning in, as we never know who will be heroic next.